×
Go to content
John Arthur Maton
19th November 1896 – 9th July 1917
John Arthur Maton was born in Bemerton, near Wilton in Wiltshire. His mother, one of twelve children, was Edith Agnes Maton (1875 – 1964). Her parents moved south to Kent sometime in the late 1890’s taking their three youngest children with them. Edith remained in Wiltshire and was employed as a servant to a household. She became pregnant and, a year following the birth of John, she married and had two further children: she remained in Wiltshire until her death in 1964.
It is unclear as to who was John’s father and John was sent to live with his grandparents in Kent. By 1901, at the age of four, he was living with his grandparents, Thomas (a farm labourer) and Sarah Maton, at Gattons Farmhouse, Cliffe prior to moving to 3, Winifred Terrace, Higham Road, Cliffe in 1911. At this point his grandfather, Thomas, is recorded as being a milkman.
According to John’s Royal Naval Seaman’s Service record he was 19 when he joined up on the 25th November, 1915, shortly after the death in June of his grandfather and was 5’ 5” in height with dark brown hair, grey eyes and of fair complexion. He too, like his grandfather, describes himself as a dairyman and no doubt aided his aging grandfather.
His grandfather died in June 1915 shortly prior to John signing up and his grandmother died in March 1917.
John started his naval career stationed at the HMS Pembroke ‘land base’ in Chatham where he would have undergone training. He then moved onto Gibraltar before returning to the naval dockyard at Chatham to undergo further training. Finally, on the 24th July 1916, he was assigned to HMS Vanguard as a Stoker 1st Class.
On the evening of Monday 9th July 1917, whilst anchored in the safe haven of Scapa Flow, the HMS Vanguard suddenly exploded killing all 843 men with only two managing to survive: Marine J Williams and Stoker 1st Class FW Cox.
The body of John Arthur Maton was never recovered and a memorial to him stands at Chatham Memorial on the Gillingham Lines.
Below is some extra information regarding the loss of HMS Vanguard.
Loss of HMS Vanguard, 9 July 1917 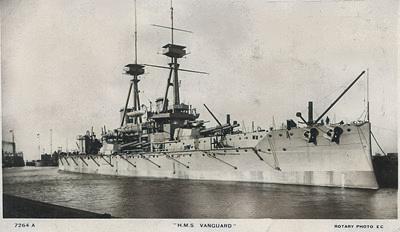 HMS Vanguard, shortly after completion
Just before midnight on Monday, 9 July, 1917, the St Vincent class battleship HMS Vanguard suddenly blew up, taking over 800 of her crew down with her. It was a magazine explosion in one of the two magazines which served the amidships turrets 'P' and 'Q'. She was a veteran of Jutland.
A definitive reason for the cause of the cordite explosion has never been found. The possibilities:
Of the three, sabotage is the least likely: no agency or individual has ever claimed responsibility; there has never been any evidence turn up in support of the theory; and just as important is the fact that when she was lost, Vanguard was one of the least modern ships in the Grand Fleet. The security measures for her were no different than for the more recent arrivals in Scapa Flow. It stands to reason that any 'agent' with the ability to destroy a Royal Navy capital ship would choose one of the more powerful ones.
Instead, the most likely cause was the second: a fire in an adjacent compartment (coal bunker or patent fuel space) which smouldered away undetected, long enough for some cordite near the adjoining bulkhead to overheat to dangerous levels. 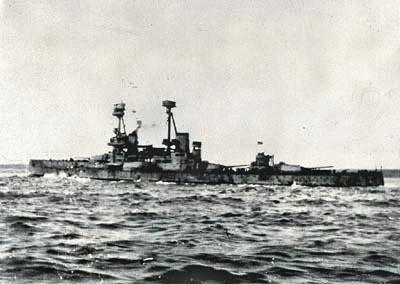 Vanguard at sea, shortly before her loss
One eyewitness account that of Charles William Mynott a signalman in HMS Marlborough would report:
"I was on watch on HMS Marlborough between 8pm and midnight [in] 1917 or 1918 and was facing HMS Vanguard and saw her start to explode, 1st aft 2 midships 3 foc'sle and then one huge explosion. I woke the Signal Boatswain who was asleep on the Bridge."
Following is an extract from a notebook maintained by Able Seaman Ernest "Mick" Moroney who witnessed the Vanguard explosion whilst on watch duty aboard HMAS Melbourne at Scapa Flow, 9thJuly 1917. Courtesy of Paul Moroney of Australia.
“HMS VANGUARD Scapa Flow North Scotland at 11.20 pm on the 9th July a great explosion occurred in the midst of the Grand Fleet, a terrible detonation took place lighting the whole fleet as if it were daylight there was a crash and one of the big boats went sky high with a crew of 900 men all searchlights were switched on immediately but not a thing was to be seen.
A trawler which was close by got smothered in blood and pieces of human flesh, and afterwards picked up half the body of a marine the only body recovered up to date. I happened to be on watch and saw nearly everything no one knows how she went up, but seeing she had a new ships company it is surmised that it was the work of German spies (Later) 2 men saved 1 Marine and 1 AB I Officer died immediately after. 187 men recovered from the sea."
Recovery of the Bodies 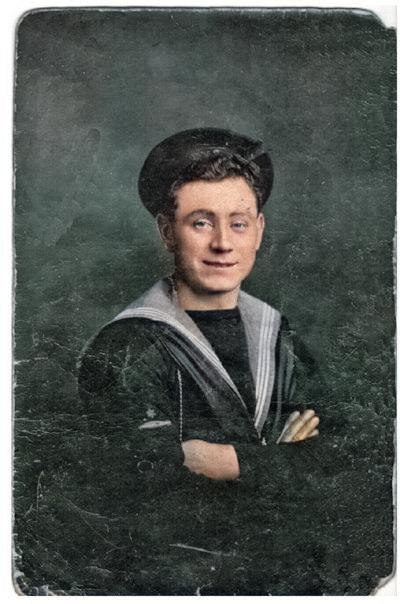 Bill Chesters has been kind enough to send the following...
Immediately after the loss of the Vanguard  the Royal Navy sent divers to the wreck to recover bodies, sensitive material and gather evidence that would help explain the explosion. Benjamin Barnes of HMS Imperieuse was part of that diving team.
The irony could not have been lost on Ben Barnes as his first ship in August 1913, had been HMS Natal that suffered a similar fate to the Vanguard when she was destroyed by internal explosion in 1915. However by 1915 Ben was no longer with the Natal but involved in the Dardanelles campaign and had his own scrape with death. Ben survived being shot by a Turkish sniper and his grandson, Bill Chesters, still has the small calibre bullet and hurt certificate in his possession. Ben Barnes was all the more fortunate as the bullet had to be removed from his neck.
Following hospitalisation at Malta, Ben returned home and fate led him to the Vanguard. It is unfortunate that like so many of his ilk, Ben Barnes spoke infrequently, if at all, of his more horrific experiences from the Great War but he did tell his family that when the diving team recovered the bodies of Vanguard men they were instructed to bring them up to the surface face first. The bodies were heavy and this was not an easy process to perform, but never the less was strictly enforced by the officers. This must have irked Ben as this was one of the few stories he recounted many times.
Ben Barnes died in 1963. On his mantle-piece the day he died was an old wooden clock with a brass mounting engraved with the words "Salvaged from HMS Vanguard, blown up July 9th 1917". From some of the salvaged teak the Carpenter of the Imperieuse had made three clocks, one for the Captain, one for himself, and one he gave Benjamin Barnes.
HMS Vanguard
by David Horne
Stand still! Stand Still! Ye leaping waves
And mourn along with me
For a gallant ship has crossed the bar
Of the great eternal sea:
A flash, a roar, a blood red flame,
Then a huge overwhelming cloud,
And a thousand soles are wrapped within
The ocean's winding shroud.
Ten thousand doors do ever lead
To death upon the deep:
Sometimes they open silently
Sometimes our hearts do creep
When a blinding flash, and a deafening crash
Sends a good ship to her doom
And her gallant crew are hid from view
Within a watery tomb.
Oh! Little we know of the price men pay
Who guard the silvery sea,
Who keep our homes inviolate
Each town, each winding lea;
We reckon it up in paltry cash
In bars of gleaming gold
But the ransom's dyed in a ruddy tide-
The blood of warriors bold!
So bare your heads ye landsmen all,
Who live at home in ease,
And pray the Lord that ye worthy be
Of the men that hold the seas;
Of the mighty Vanguard who are stood
So valiant in the strife,
Of her gallant crew that flashed from view
Through death to endless life!
From the Chatham News, 24 July 1917, courtesy of Jonathan Saunders. 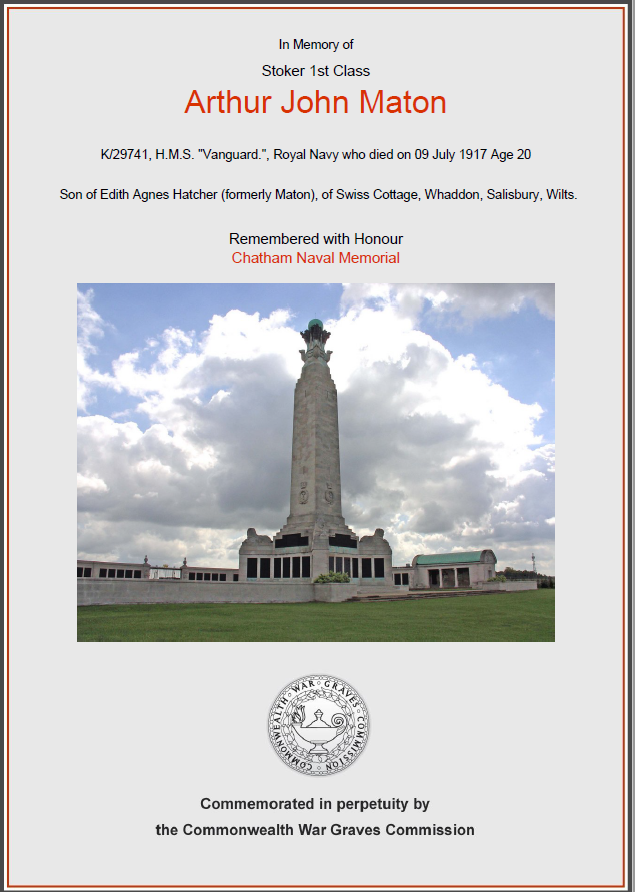