×
Go to content
Stirling Bomber Crash
Rye Street
The Stirling bomber W7628 OJ-B was commanded by Flight Sergeant (Pilot), 22 year old Adolph Siwak, of Angusville, Manitoba, Canada. The aircraft took off from R.A.F. Lakenheath, Suffolk at 18:36 hours on 23 October 1942 on a bombing mission to Genoa, Italy.
112 Lancasters of 5 Group and the Pathfinders were dispatched in a mixed bomber force to re-commence the campaign against Italy, which was timed to coincide with the opening of the British Eighth Army offensive at El Alamein, Egypt. It was a perfectly clear moonlit night and the Pathfinder marking was described as being both prompt and accurate. The bombing by this comparatively small force of aircraft, carrying only 180 tons of bombs, could hardly have been carried out under more ideal conditions.
A number of aircraft were lost on this raid but none reportedly due to enemy action. Some crashed on landing, other losses were due to mechanical failure, and others being low or completely out of fuel after their long haul to Italy over the Alps, where Bomber Command had been called upon to attack Northern Italian ports in support of the Allied Landings on North Africa - Operation Torch.
On the return leg of the mission the Stirling ran out of fuel and crashed at 0300 hours into a row of four cottages and a farmhouse at Rye Street, Cliffe-at-Hoo, on the Hoo Peninsular five miles north of Rochester, Kent, killing the seven crew of the bomber. There was a civilian casualty, a 21 year old Lilian May McPherson, who had recently given birth to a baby girl, died of exposure before help could get to her. The baby survived.
Newspaper report on the tragedy.

This is an extract from the Bomber Command losses book of 1942:
"Aware that the crew were in difficulties, a local searchlight battery switched on its lights directing the beams towards nearby marshes, but to no avail. At least two cottages bore the brunt of the impact; Miss Delia Batchelor woke to find pieces from her bedroom ceiling on her bed and was then shocked to discover that the outside wall of the room had disappeared. Already, local inhabitants were trying to help but for Mrs Lilian May McPherson, just 21 and the mother of a two-month old baby girl, Diana, it was already too late. Taken from what was left of 3 Rye Street Cottages, to an army medical facility at Cooling Castle she was pronounced dead soon after being admitted. Miraculously, her little girl was found in an alcove, still in her crib, and completely unscathed. Both Canadians were taken to Brookwood Military Cemetery, as was Sgt Blake, their four companions being claimed by their next of kin."
Another reason put forward for the crash was that a searchlight crew half a mile away had been unable to make radio contact with the plane, and they illuminated the houses for the pilot to see as there were open fields all around. The pilot appears to have thought they were showing him a way down and flew down the beam. Certainly it was reported that it appeared to be in some trouble as it made several circuits. The aircraft ended up in the field opposite. Two Canadians and another crew member are interred in Brookwood Military Cemetery, Surrey, and the other four were laid to rest in their respective home town or village cemeteries. 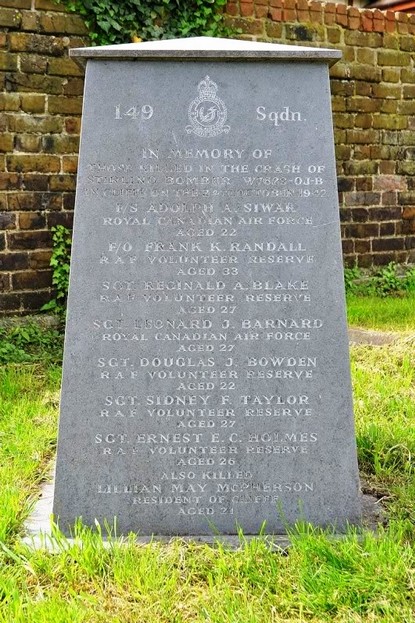 After a great deal of work and research into this tragedy had been conducted by a group of local villagers, which is far more detailed than produced here, and together they unveiled a Memorial Stone in memory of those killed in the crash.
Back to content