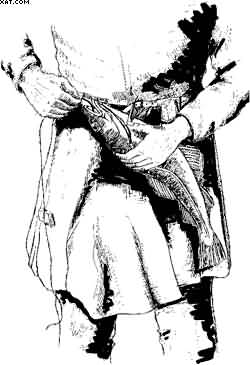 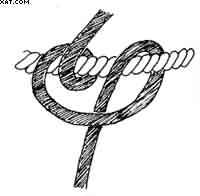 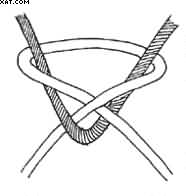 First of all a heavier duty line is positioned at a convenient working height and running the estimated length of the intended net.
A long quantity of nettle-hemp is then tied to the main line using the clove-hitch knot; these need to be equally spaced along the main line. After the length of the main line has been completed it is then that the hemp is tied together, using the sheet-bend, to form the mesh. The most difficult and important part of the operation is the ability to make sure that the mesh is kept to the same dimensions: fingers or a piece of scrap wood may be used as a rough guide. To help hold the nettle-hemp a netting needle may be used. The netting needle can be made out of wood, bone or antler.
Stone weights have been found that have been attributed as net sinkers. These weights have a hole or holes bored into them and help, with the aid of buoyant floats, keep the net vertical in the water and fished as a gill or seine net. An alternative style of net sinker has been found at Hedeby in Northern Germany. Rather than drill a hole through a stone, a hoop of willow or hazel is made around the stone which is fairly flat to start with, then across and either side of the stone, some bark crosses are sewn with fine bark strips to the hoop, pinning the stone in between. The hoop left sufficient room between the stone and the hoop itself.

Long-netting could also take place in similar locations to that of the on-shore long-liner. The net would be angled so that the incoming tide would wash over it and then, on its way out, fish would become entrapped. A variation upon this is to make a tide pool out of rocks, which allows the tide to flood it and bring in fish too, but as the tide runs back out to sea, the pool drains through the stones trapping the fish behind the rock wall.
Nets would have also been used to net off sections of rivers or even complete rivers to trap migratory fish such as salmon, trout and sea trout. They may also have been used to section off breeding areas as the Romans had done a few centuries earlier.
Haaf-netting (from the Norse 'haf', the open sea) was a form of net fishing practised in areas like the Solway Firth mudflats to catch salmon. The nets used are cumbersome affairs - 16 feet (5 meters) of meshed twine slung over a 14 foot pole. The fishermen would form a line and walk up to their chests against the tide in the channel. The haafer holds the net against the water with his left hand and grips the beam with his right. He pulls six meshes with his thumb to make a bag, and when a salmon enters he presses down on a special rung. The haaf floats to the top; the netsman turns his back to the tide, kills the fish with his 'mell', or mallet, and flings it into a special compartment - while concentrating on not being swept away by the strong tidal flow. 10
Fish Traps
Although little has been recovered in the way of wicker fish traps, they are referred to in Anglo-Saxon texts 11 and from illustrations from the period. The traps would have mainly been used in flowing rivers and tidal estuaries to catch all manner of fish including eel, salmon, trout, dabs, flounders, etc. They would have been about 5 feet long and would have consisted of two chambers: a large opening funnelling into the main basket.

A   typical cross-section of a fish trap.
Along the mudflats on the South Essex coast an aerial survey identified a massive complex of wooden fish-traps, comprising up to 13,000 timber posts, located ½ a mile out to sea. A more detailed investigation carried out by boat has revealed a dozen lines of timber - some of them more than half a mile long- in the Blackwater estuary, 15 miles south of Colchester, dating from the 7th to 10th centuries AD. The timbers were the uprights of wattle fences, the complex containing up to 100,000 square feet or 30,500 square metres of fencing, some of which still survives.
The fences - laid out in a series of V-shapes - were used to funnel the outgoing tide, and its fish, into nets at the apexes. They would have yielded several hundred thousand fish per year: far too many to supply a single community, suggesting that the trapping was carried out for commercial purposes. The fish would have been salted, dried and, presumably, sold to communities in south-east England. It is not known who maintained these traps but, just seven miles away is Bradwell-on-Sea, where one of Englands earliest monasteries stands, founded in 654 AD. Across the Thames estuary from the Blackwater lies the estuary of the River Medway with similar terrain features. Along the Medway estuary, although no extensive finds such has been found on the Blackwater, references to 'fish factories' are included in the Domesday Book. One wonders! 12
It is likely that the trap was flat bottomed to allow it to lie on the river or sea bed without rolling with the current or tide. For eels it would need to be baited with a dead fish, this would attract the carnivorous eel into the funnel and once inside, they would find it difficult to escape. Single chambered traps may also have been used by the early medieval fisherman; these would have been something akin to the salmon putchers used earlier this century in Scotland and on the Severn River. The main advantage of these traps was that smaller fish could be caught, there was little danger of the fish swimming away from them as in the case with a net and they were relatively easy to maintain.
The traps themselves would be made from willow 'withies' that had been cultivated for at least three years. Today there are withy beds in the Southwest that produce willow withies in white, buff and brown. White withies are produced by stripping the bark away, the buff has been boiled with its bark on and then the bark then removed and the browns are the withies complete with bark. In the early medieval period the majority of the basket work was functional and there was no need to add extra work to the making of fish traps and baskets: brown withies would have been the most common. To weave the withies they would need to be soaked so as to make them pliable, they would need to be left to soak overnight to enable the surface water to penetrate to the pith of each withy.
Fish Spears

A typical eel spear. Notice   the many-barbed side to perfect a grip upon those slimy   little beasties.
Eels were a favoured fish of the period and these were caught by spear too. During the winter months the eel buries itself into the mud together with other eels. By using a spear one can poke around into the muddy bottoms of river or estuary until an 'eel nest' is located; many eels can be caught in this manner.
Lures
Today much is made in the way of lures to attract fish and these include pirks for deep-sea fishing, flies for trout, salmon and grayling, plugs and spinners for pike, salmon, bass, cod and flounders. There has been little in the way of recovered artefacts to show that the people of the 10th and 11th century made much use of such items. There is, however, one example of a gold fishing lure; similar in design to a Devonshire Minnow, that is dated to the period. This lure, now housed in a Cumbrian museum, is thought to have been used to fish for the elusive char that is renown in the Lake District.
© 1993 D. Green & Regia Anglorum Illustrations © 1993 Colin Levick
Back to content