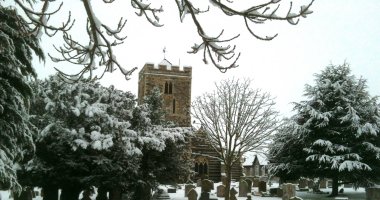 CLIFF is within the ECCLESIASTICAL JURISDICTION of the diocese of Rochester, and  being a peculiar of the archbishop of Canterbury, is as such within the deanery  of Shoreham. The church is dedicated to St. Helen. It stands at the north-west  side of Churchstreet, and is a large handsome building, equal to most other  churches in this county. It consists or two side isles, a nave, and a chancel,  all lofty and
spacious; the roof is covered with lead, and the walls embattled; at the west end is a good tower, in which is a clock, and a ring of six bells. In the chancel there are remains of good painted glass, and on the roof the arms of archbishop Arundel. Here are likewise six stalls, for the use of the monks of Christ church and others of the clergy, when they attended divine service in  this church. Such stalls are frequently observed in the chancels of churches  where the large monasteries had estates, being placed there for the above use,  for formerly the clergy and laity sat apart, the former in the chancel, and the  latter in the other parts of the church, in like manner as at present in the  Roman Catholic countries abroad. There was formerly an organ in this church, the  case of which is yet remaining. Among other monuments and memorials in it are  the following: In the nave, round the verge of a coffin like stone, in Saxon  capitals, these words, JONE LA PEMME JOHAN RAM GYST YCI DUE DE SA ALME EIT MERCI  +. On a grave stone a brass, with the figures of a man and his two wives and two  children, for Bonham Faunce, gent, of this parish, ob. 1652, having had by his  two wives, Elizabeth and Mary, each one child; another a brass, with the figures  of a man and his two wives, one of them lost; and six children, for Thomas  Faunce, yeoman, who had two wives, Alice and Elizabeth, by the former he had two  sons and one daughter, and by the latter one son and two daughters; he died in  1609, Alice died in 1592; Thomas his eldest

This inscription, in Saxon capitals (Lombardic), ELIENORE DE CLIVE GIST ICI DEU DE SA ALME EIT MERCI AMEN PAR CHARITE. Drawn and etched by J Fisher 1789AD
son, being mayor of Rochester at his father's decease; on a pillar, south of the entrance into the chancel, on a brass plate, an inscription, with an account of John Browne's charity to this parish, as mentioned above. In one of the windows are these arms, Azure a cross patonce between five martlets or. In the north isle, round the verge of a stone, in the form of a coffin, this inscription, in Saxon capitals, ELIENORE DE CLIVE GIST ICI DEU DE SA ALME EIT MERCI AMEN PAR CHARITE. In the south isle, a brass for Elizabeth Gissome, wife of James Gissome of this parish, obt. 1688. A memorial for the Baynards of this parish. The church of Cliff (to which there belongs a manor in this parish, called Parson's borough, for which a court baron is still held) was part of the antient possessions of the see of Canterbury, and was excepted in the great deed of exchange, which archbishop Cranmer made with king Henry VIII. by which he conveyed all the rest of his estates in this parish to that king, as has been mentioned before. The archbishop of Canterbury still continues patron of this rectory. In the 15th year of king Edward I. the church of Clive was valued at one hundred and ten marcs. In the year 1650, it was valued at. £200. It is valued in the king's books at £50 and the yearly tenths, £5. The present rector is paid £500 per annum by the parishioners in general, who agree to pay all land and other taxes besides, and they levy the whole at so much per acre among themselves, which raises in the whole about £650 per annum. The rector by old custom is bound to distribute at his parsonage house on St. James's day annually, a mutton pie and a loaf, to as many persons as choose to come there and demand it, the expense of which amounts to about fifteen pounds per annum. This continued till within these few years, but the present rector has found means to obtain the parishioners acquiescence for the discontinuance of it. The tithes of the marsh land in this parish caused continual disputes between the prior and convent of Christ church and the rectors of this parish, concerning which they came at last to a composition, in 1229, which was confirmed by the archbishops, Richard and John; but this not satisfying the convent, they obtained, in 1290, from the rector, John de Bestan, an instrument under his seal, by which he relinquished all right and title to them; since which, to the present time, the marshes in this parish have been exempted from the payment of tithes. The prior and convent likewise contended for an exemption from tithes for their sheepcotes and mills in this parish, and the small tithes of their manor of Cliff, all which they obtained, in 1254, from Hugh de Mortimer, then rector of this church, by an instrument under his seal, but the disputes between them, owing to the incroachments of the convent, still continued, to settle which there were several compositions entered into between them at different times, which were confirmed by the several archbishops; all which may be seen in their registers, and in the Chartae Antiq. in the Lambeth library. This parish is a peculiar jurisdiction, exempted from the authority of the dean of the arches, who is the commissary of the deanery of Shoreham, and the rector of it is only visitable by the archbishop at Cliff. He is ordinary of his parish, and exercises several branches of ordinary jurisdiction, without any special commission. 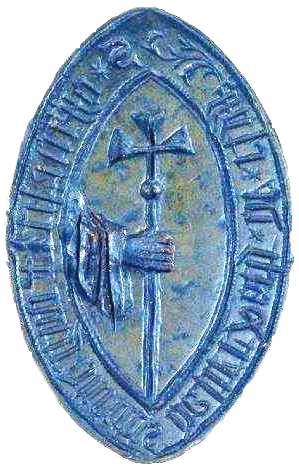 By himself, or his surrogate,   he holds a court every year, soon after Easter, for the   taking the oaths of the churchwardens on their entrance into   office, and he grants licences for marriages, probates of   wills, and letters of administration. The seal, which once   belonged to the ecclesiastical court of Cliff, having been   many years lost, is said to have been found some years ago   on Blackheath; the impression, A man's hand issuing from a   gown sleeve, (probably that of doctor of laws) and holding a   long staff, with a cross fixed on the top of it. The   inscription, in old English letters, S. OFFICIALIT +   JURISDICTIONS DE LIBA POCH DE CLYFF, i. e. the seal of the   officiality of the jurisdiction of the free parish of Clyff.   The seal now used seems to be antient; the impression is the   figure of a bishop, with his crosier in his hand; the   inscription, S: PECULIARS: JURISDICTIONS: RECTORIS: DE:   CLYFF, i. e. the seal of the peculiar jurisdiction of the   rector of Cliff. Godfrid de Scraembroke gave the tithe of   his land at Scraembroke, in the parish of Cliff, to the   priory of St. Andrew, in Rochester, soon after the conquest;   which gift was confirmed to it by Richard, Baldwin, and   Hubert, archbishops of Canterbury. There were lands in this   parish of the yearly value of sixteen pence, given for the   saying of a mass yearly in this church.
Back to content