×
Go to content
The Organ
Organs could sometimes be found in churches before the Reformation. Their place would normally have been in the Rood loft. This explains why we hear reference to the organ ‘loft’. However, most of the music in our ordinary parish churches prior to the Reformation was provided by wind and string instruments played in the broad Rood loft. Later they were relegated to the gallery at the west end of the building where they were tolerated rather than enjoyed. Puritan influence led the people to frown on any form of joy and praise in public (or even private) worship. The Puritans’ dislike of music resulted in many an organ being disposed of when the Rood was taken down. The earliest available reference to an organ in St. Helen’s is a note on a fly leaf of Churchwardens Account Book of the date of 27th May 1841. This reads — “A Winch Organ put up in Cliffe church by voluntary subscription…..

It is believed this is the instrument which stood against the north wall of the chancel to the east of the choir stalls and was the predecessor of the present organ. A water colour of the interior of the building includes an organ in this position. Its place may be determined pretty accurately by an area of floor tiling which appears less discoloured and worn. It is surprising that the Reverend H. R. Lloyd made no reference to an organ when he wrote of the dilapidated state of the chancel in 1869. The organ was obviously re-set upon the new tiles which were subsequently laid.
A move was made in 1884 for the organ to be re-positioned. Two Faculties exist referring to this. The first, dated 8th July 1884, gives authority for “the organ to be removed from the Chancel and placed in the south transept”. This was during the incumbency of the Reverend Stanley Leathes, D.D. Twelve years later a mammoth Faculty included this entry that the organ in its present position “spoils the architectural proportions of the chancel and that it is desirable it should be moved to the south transept (or some other spot) where it would not spoil the architectural effect of the building and would be equally well placed both as regards choir and congregation for leading the musical part of the service”. At a meeting held on 25th April 1903 — “The Rector (The Reverend H. B. Boyd) then intimated that he was “desirous to see a new organ replace the present inefficient and worn out instrument; he hoped the communicants would agree with him, which they showed very clearly they did. Mr. Rogers (the schoolmaster) made a few remarks showing how needful a new organ was, and the value of each and all co-operating with one another in raising the needful funds”. 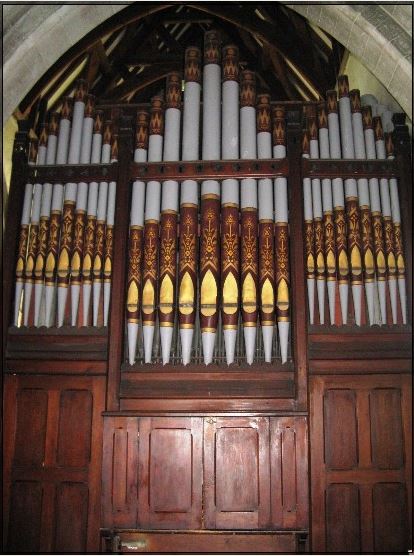 In the Parish Magazine three months later is this entry —
“At last we are embarked on the difficult task of raising funds for our new organ. The present instrument is wholly inadequate to the size of the church and the character of the services; it is also a disfigurement both by its shape and position. The new instrument will stand in the south transept, opposite the side-chapel. The Bishop of Rochester has written to the Rector approving of the step that is being taken, and recommending its support; as he truly says, the present organ is ‘quite unworthy of the noble church in which it stands” At present no steps have been taken to raise funds in the village; but the Rector has already collected a large sum, and a meeting of the congregation has been held to see what we can do here to help on this most desirable improvement”.
The following month, the Parish Magazine contained this — “As our readers have seen for themselves, we are building a large organ of two manuals and twenty-four stops, in the south transept. If the instrument is really satisfactory it will be given as a present to the church and parish. But the congregation will have to raise the funds necessary for enlarging the choir stalls and for providing an oak case for the new organ. So far as we can see at present, about £60 to £80 will be required for these two purposes. . . already we have promises which amount to £10, as the result of our meeting on 15th July”.
The Parish Magazine of September 1903 contained the following:— “Since our last issue the organ is an accomplished task; it certainly has fulfilled our expectations and is a notable addition to our grand church. As formerly announced the instrument is a gift to the congregation.” An entry in the Parish Magazine of January 1904 reads — “The new organ and choirstalls have been the outstanding improvements in the Church Improvement Scheme for this year.”
In the Parish Magazine for May 1946, it was noted… “The organ should be rebuilt and modernised”. However it appears this work had to wait, because of other urgent repairs to the fabric of the building (after the war).
The Reverend Canon F. S. Gammon, the Rector, wrote the following in the Parish Magazine for November 1947— An interesting visitor to Cliffe a few Sundays ago was Mr. S. F. Dalladay, A.R.C.O. of Hastings, who, on entering the church said “It is forty-six years ago since I last entered this church.” He has just retired from business as an organ builder and all those years ago he had the job of erecting the present church organ, and dismantling the organ which used to stand in the chancel. While the work was in hand Mr. Dalladay was guest of the Rector, Mr. H. B. Boyd, whose gift the organ was, and who enthusiastically lent a hand with the work. The organ was not new when it came to Cliffe, but was previously in the church of St. John at Coventry, and Mr. Dalladay was delighted to find how well it had stood up to its job in Cliffe. It wasn’t until the summer of 1961 (during the incumbency of the Reverend John W. Henderson, A.K.C.) that the rebuilding and modernising work on the organ was carried out. This was undertaken by Browne’s of Canterbury at a cost of nearly £1,200. During the time the organ was out of use a grand piano was placed in the chancel. Mr. R. J. Pollard was organist and choirmaster then.
Like most church organs, the bellows of this instrument are no longer pumped by hand but powered by electricity. The wooden casing in the area of the blower is fairly well covered with graffiti, most of which is likely to be the names or initials of a long line of “blowers”. An entry as long ago as 1895 notes “Organ blower’s salary—£1. 6s 0d.” But that, of course, would have referred to the previous instrument.
Back to content