×
Go to content
Crossing the Thames
Why did Cliffe become one of the most important settlements in Kent?
The main reason why it attracted the attention of so many was mainly due to the ability to cross the River Thames at this point. Looking at the river today some would find it difficult to imagine a crossing at this point but it has been well documented during the past two millennia.
The original age of the crossing is uncertain but probably extends beyond the Bronze Age and this is evidenced by the number of artefacts found on either side of the Thames showing that trading between Essex and Kentish tribes was a common practice.
One of the first written records of a crossing point is by the Roman, Dion Cassius, describing the progress of Plautius, the Roman General under Emperor Claudius, in the year 43 AD.
“From there the Britons withdrew to the Thames, at a point where it flows into the sea and at high tide forms a lake. This they crossed with ease since they knew precisely where the ground was firm and the way passable. The Romans, however, in pursuing them, got into difficulties here.”
(Cassius, Dio, Roman History, Book 60, Loeb Classical Library, 9 volumes, Greek texts and facing English translation: Harvard University Press, 1914 thru 1927. Translation by Earnest Cary.)
The geology of the area shows clearly that the chalk cliff, after which Cliffe is so named, was an important feature in the landscape. It is downstream from the chalk cliff that the River Thames dramatically widens and so the location of the crossing point can easily be established. Even today it is easy to visualize the ‘lake’ reported by Cassius and, by referring to both the geology and historical and archaeological evidence, where a crossing may have been.
These crossing points (fords) were exploited by the Romans who, in turn, established a causeway and, as ships could not navigate beyond this point, a port and a road system to cater for passage of both port and crossing.
It should be pointed out that during the Roman period the River Thames was at least 9 feet lower than it is today (Devoy, 1980) or upwards of 15 feet lower according to Wheeler (R.E.M. Wheeler, London in Roman Times, London, 1930) , and what we today call the ‘marshes’ was well and truly dry land and may have  continued to be so until the surges of the 13th and 15th centuries. It has been suggested that a complete Roman landscape may survive beneath 1-2m of later accretion on the Cliffe marshes. (Monaghan 1987, 28).

“The sum total of the meagre and often indirect information as to the state of the marshes from the seventh to the tenth centuries leaves a strong impression that although the land may not have been as elevated as in the Roman period it was certainly higher than now.
So much so that lands which to-day would be regularly flooded by the Spring tide were it not for the river walls, were then apparently quite free from this threat, since they were regarded as valuable meadowland.
It is difficult to imagine that the Saxons of this age had the resources to build river embankments (supposing that it was necessary to do so) around the great areas described in the Charters, and since works of this kind are never mentioned as convenient land boundaries we may assume that they did not exist. All the inferences point to the conclusion that such defences were not yet necessary.
It has been the sinking of the land with the consequent development of salt marshes which has isolated Hoo Peninsula from the North and left it in the neglected and back-water state that it is in to-day.”
(Evans J, 1953,) 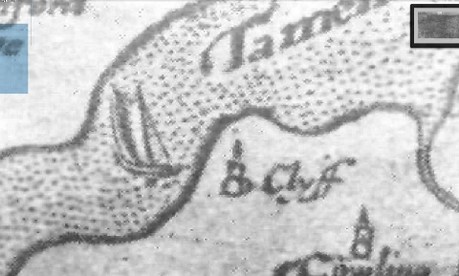 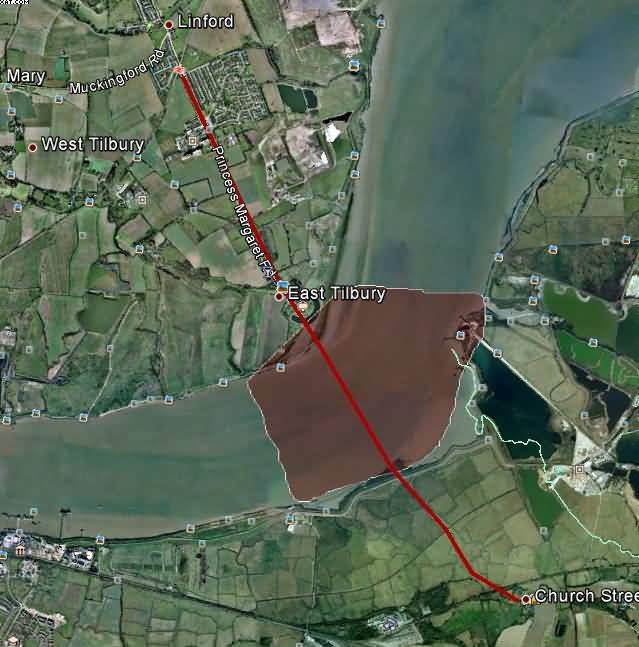 The red line shows the link between Kent and Essex. The lighter red shows the most likely areas in which a ford may have been.
As sea levels rose the fords became unusable and ferry/ferries took their place. There was at least one port situated at Cliffe – possibly two with one situated at Cliffe Creek and the other at Cliffe Fleet: both linked by excellent road systems. In March 1301 it is recorded that King Edward I ordered a general levy of ships to be sent into Scottish waters as part of his campaign to subdue this constant thorn in English diplomacy. Amongst the ports mentioned, was that of Cliffe which had to supply one vessel. In the year 1326, Cliffe was mentioned as a port and, again with references to a significant port at Cliffe Creek - it is said to have provided Edward III with two ships in 1346 for his campaign in France (Cracknell 2005). In 1380, when it was recorded as having one 80—ton vessel stationed there. Finally, in 1417, two ships were hired from Cliffe as part of Henry V’s campaign in France.
With the land around Cliffe subjected to the constant danger of flooding, the numerous creeks silting up, the raising of the sea level enabling the Thames to be navigable further upstream, the consequence of the Henry VIII’s moves to reduce the influence of the church and other factors the crossings and ports became obsolete.