×
Go to content
The Bells
A low doorway and two steps lead into the Ringing Chamber. This has a wooden floor and roof. The matchboard round the walls was part of the improvement scheme of 1901 when in May of that year the Rector wrote “The Belfry has been thoroughly done up — the matchboarding and new linoleum and the whitewashing have made the Ringing Chamber look bright and cheerful”. Re-decoration took place again in 1974 with the ringers doing the work themselves. In the process an area of graffiti on the clock weight casing was preserved for posterity. The carpet was purchased from funds raised as a result of collecting and selling waste paper. The laying of the carpet was the particular work of two ringers — husband and wife, Mr. and Mrs. Norman Reiph. The five wooden benches were made from driftwood salvaged from the banks of the nearby river Thames. The small cupboard designed to hold text books and other literature on campanology was presented
“In memory of Barry John Couzens, bellringer at this church from 1950 to 1972”.
The bell ropes were purchased at a cost of £100 from funds raised as a result of a Sponsored Walk undertaken by the bellringers in 1973. There is an entry in Churchwardens Accounts of 1849 stating that £2 8. 0. was spent on a “new sett of bell rops”. That was in the days when there were only six bells to buy ropes for, and when a complete set could be bought for less than the price of one rope today. In 1862 the cost of 8 bell ropes was £54. 0s
This year, 2017, the bell ropes were once again replaced but at a cost far greater than the £100 of 1973!
The ‘squint’ window on the east wall opens to reveal a superb panoramic view of the interior of the building. It is thought that Smetham (Henry Smetham – ‘Rambles Round Churches) may have mistakenly attributed this window to the Porch Room in his writings and it could be more correctly connected with the gallery which would have been immediately below in the Nave. The lowering and raising of the roof probably had some influence on the size and shape of this window over the centuries.
The eight ropes on a frame on the west wall are those of the Ellacomble Chiming Apparatus. An entry in the records of 1876 reads “chiming apparatus £2 10. 6d”. A further entry in the Parish Magazine of February 1901 mentions “the chiming apparatus which has just been fitted up in the belfry . . . In future we aim at chiming in the mornings and ringing for the evening services on Sundays”.
Ringing Chambers invariably contain records of peals rung on important royal, national, historic and local occasions. These records usually list the ringers and sometimes a word or so is added about their expertise. This chamber is no exception. An impressive board records:—
The Ancient Society of College Youths
On Wednesday December 26th. 1866 was rung in
this steeple, a true and complete Peal of
Grandsire Triples
Containing 5040 changes in 3 hours 3 minutes.
Performers
H. Edwards  -Treble
H. Booth  - 2nd
G. Nash  -3rd
G. Grice - 4th
M.A. Wood - 5th
R. Hopkins - 6th
W.C. Middleton -7th
A. Hayward - Tenor
Conducted by Matthew   A. Wood
This appears to coincide with the return and rehanging of the bells following recasting.
During earlier times the bells were part of life itself being time-keepers, used on festive occasions and on solemn ones, for informing parishioners of emergencies and for drawing the people from their work and worldly pursuits for prayer and worship.
At the end of 1976 those who ring the bells regularly here include:
Mr. B. R. Trill — Captain of the Ringers
Mr. N. Relph
Mrs. N. Relph
Mr. J. Parnell
Miss R. Hagreen
Mr. A. P. Gray
Miss C. Philcox
Mr. D. Slater
Mrs. B. R. Trill
Mr. A. A. Gray
Mr. D. Relph
Mr. G. Morrad
Mr. L. Crouch (Strood)
Today we have a thriving company of bellringers ably led by our Tower Captain, Mr. Bryan Boughton, and all newcomers are warmly welcome.
On the next floor, reached by way of the ladder and through a trap door, we come to the Silence Chamber. Massive oak beams resting on large stone corbels are the most impressive feature here. The bells and the bell-frames are supported by these and, in considering the weight, account should be taken of the stress and movement involved when the bells are being rung. 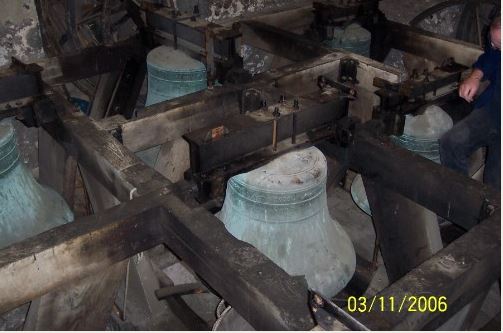 Photo courtesy of Mike Rickard
The walls have at some time been covered with a thin layer of plaster which is now flaking off. Several mortar filled cracks reveal evidence of past movement which is an accepted occurrence in most towers of ancient churches where the bells are rung.
The 13 amp three-pin power point (along with similar in the ringing chamber and at the base of the tower) was installed free by The Westminster Dredging Company who used the tower in 1975 as a point for a radio beacon to monitor certain work they were doing in the river Thames. A practical token of appreciation which has already proved most useful.
Entry into the Bell Chamber is by a short wooden ladder and via a trap door. The chamber has a wooden pyramidal ceiling and four louvre lights — one in each wall. These louvre windows are a reminder that they were originally so designed for the purpose of letting out the smoke from the fire in the ‘lantern’ or tower, as well as to allow light to enter whilst at the same time excluding rain. These sloping board ‘windows’ still fulfil the last two functions. The eight bells and their metal bearings are hung on appropriately proportioned frame fittings and this complete structure fills the chamber from wall to wall.
The following is an extract from the Clyffe Registers: -
“At a Vestry held this 3rd. Day of December 1858 to decide on the re-casting of the church bells. It was agreed that Messrs. Taylor of Loughborough, should have the matter entrusted to their care as per their estimate, and that the bells should be sent at once — Estimate £168. 10. 0d.
Ed.HenryLee, Curate”
Another entry in the Clyffe Register 1720 - 1812 reads:—
“In 1862 the Peal of Six Bells, some of which are cracked, and the whole most unevenly weighted, was re-cast (by Messrs. Taylor and Co., of Loughborough, who also constructed the new frame) and with two new Trebles cast two years afterwards now consists of eight bells.”
All the bells bear the name—John Taylor Loughborough with the date 1859 on six and 1860 on the other two.
A local source has it that the consignment of six bells left Loughborough by Grand Junction Canal boat on 12th June 1859 and were first rung on Monday 4th July 1859 by the Woolwich ringers. The additional two bells left Loughborough by canal on 7th December, and the bells at Cliffe were first rung as an eight on Christmas Day, 1861.
Obviously the name of the nearby inn goes well back in time.
This is.a copy of a letter pasted in the front fly leaf of Clyffe Register 1720 - 1812. Bell Foundry, Loughborough.
Aug. 8th. 1874
From John Taylor & Co.
To the Revd. Henry Robt. Lloyd— Cliffe Rectory.
Reverend Sir,
We have much pleasure in sending you a copy of the weights of Cliffe Bells    viz:
Your further enquiries will have our best attention.
We beg to remain,
Rev. Sir,
Your obedient servants
John Taylor & Co.
The Clyffe Parish Almanack for 1877’ notes “the parishioners have good reason to be proud of their noble church with its Ring of Eight Musical Bells”.
An eleven rung vertical wooden ladder on the north wall of the bell chamber leads up to a couple of rough wooden doors which give access to the, outer limits of the tower. Ascending and descending this ladder is a hazardous affair, and is not recommended for those who suffer from vertigo. A new ladder has been ordered to replace the present aged and creaking one, for although persons generally are discouraged from going out on to the tower parapet those whose duty takes them there are likely to go with more confidence when they know the ladder is secure.
A full article on the history of our bells, their recent (2006) refurbishment where the bells were removed and returned to the foundry and subsequent return to St Helen’s – complete with many, many photographs of the occasion – can be seen on the Parish of Cliffe’s historical website:
http://cliffehistory.co.uk/bells.html
Back to content