×
Go to content
SOUTH TRANSEPT
The South Transept is of the same period as the North but has less ornate arcading which suggests ‘overlap’. The arcading of the West wall differs in style from that opposite. The former was, of course, an outer wall before the South Aisle was widened. It is interesting to note that one pillar here is rectangular. The string-course has largely been restored, although there are sections of the original to be seen. Apart from the large three-light south window there are three smaller, single light, clear glass windows. This transept was restored in 1868. In late 1973 and early 1974 plaster board was fitted over the old wattle and daub ceiling. ‘This work cost £370 plus V.A.T.. Three (and sometimes four) young men were employed on this work with scaffolding erected throughout the transept. The mess they made had to be seen to be believed. What a contrast to Joseph Taylor and the work done on the north transept! Needless to say, the covering down of the organ was vital, but the high density of dust caused considerable anxiety. Whilst clearing debris from a high ledge a clay pipe belonging to a workman of former times was found. Unfortunately it was dropped from the scaffolding. Similar to the slate pencils reputed to have been used in the North Transept such treasures as clay pipes have all but disappeared!
The organ now occupying one third of this transept came from Coventry: it was bought second-hand and re-built in 1903. In 1961 it was again completely re-built at a cost, of £1,200, the money being raised from amongst parishioners in various ways, including a Talent Scheme. This work was done during the incumbency of the Reverend J. W. Henderson, A.K.C. Those who were responsible for the siting of this organ were presented with something of a dilemma. The previous instrument stood in the Chancel. A water-colour painting in the possession of the Church confirms this. The position of the present organ detracts from the spaciousness of this area of the building and precludes light entering the space about the Chancel step. Although there are references to organs in Britain as long ago as the 10th century, they were not generally found in parish churches. In an ancient church there invariably appears evidence of the difficulty of accommodating an organ.
The floor of this transept is fairly extensively covered with red tiles with black marginal design. These red tiles are laid on either side of a wide band of finely cut quarried stone placed east to west. At the south end of the transept are four tomb slabs most probably in their original position, and one has a brass, reading:—

“Heare Lyeth the body of Elizabeth Gissome late wife of James Gissome of this parish who departed this life the 14th. day of Novemb 1668 being aged 19 years and 10 moneths”.

A skull is featured below with the words “Vivit Virtus Post Funere”. A section of stone bench runs below the west wall. It appears to have been re-built but could well be the remaining end of the bench that ran the whole length of the wall to accommodate those who were too elderly or infirm to stand throughout the Mass.
One or two hooks and brackets around are reminders that long curtains hung here for a few years in the 1960’s. However they were removed in 1972 opening up the wall paintings to view and displaying the fabric to greater advantage.

The South Transept Wall Paintings
In the south transept (There has been at least one altar in this transept, and a piscina still remains,) the painting on the east wall, south of the southernmost window, represents the Last Judgment. The subject is boldly treated, in five series of figures. At the top we see the Saviour in Majesty, seated upon a rainbow; below Him the angelic host; beneath them the Resurrection of the Just; lower still the Unjust appear, with an avenging angel, sword in hand, in their midst, and beneath them gape the jaws of hell. 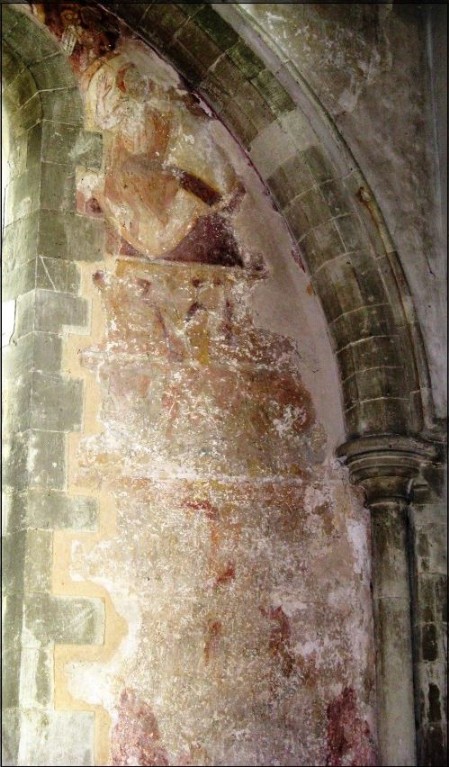 On the north side of this window the subjects cannot so clearly be seen; one seems to be such a scene as that of David beheading Goliath or possibly the Martyrdom of St. Margaret.
It is said that St. Margaret of Antioch was beaten with staves and scourges, one of the many tortures decreed by the Roman Governor Olybrius for her when she refused to give up her Christianity and succumb to his seduction attempts.
Margaret was triumphant in the end; after many other tortures, culminating in her being swallowed by a dragon, she succeeded in bursting out of its swollen innards, and in some versions of her Legend she then leads it tethered by her girdle.

The wall paintings here are well preserved in spite of the ravages of time, and when the light is favourable some of the finer detail may easily be discerned.
Below these paintings would have stood an altar, as indeed does one today. The original altar, however, would have been of stone, whereas the alter in situ now is wooden, having been transferred to its present position from the Church of St. James’, Cooling, following the implementation of the Redundancy Order on that building in November 1976.
Back to content