(29th December 1890 - 3rd October 1918)
Cliffe at the turn of the 19th Century was a busy, bustling village with a whole range of shops centred on Reed Street, The High Street and Church Street which managed to cater for all. Much of the reason for Cliffe’s expansion of population was the employment opportunities given by the cement works and the Cutis & Harvey Explosives Factory that lay just outside the village.
One of the establishments was the Victoria Public House which nestled between the village’s two oldest pubs in the High Street: The Six Bells and The Black Bull. With the village full of workers these pubs would have been very busy places, not only as places for rest and relaxation, but also as lodgings for men who had come to find work at Cliffe.
The Victoria was owned by Frank and Annie Thorndike and the Thorndike family were highly respected in the village (and by the brewery too) not only due to them being related to many of Cliffe's merchant families but their hard working attitude, sense of fairness and support for the village.
One of their sons, Thomas Thorndike who was living at 9 Reed Street with Laura, his wife, worked at the coal yard that was attached to the Victoria. It round about this time that Thomas and Laura began a family but all was not well. Their first two children, Sydney George Thorndike and Thomas William Thorndike, both died in infancy: Sydney being 2 years old and Thomas being 3 years old. Their next child, again a boy, was Roland who was born 29th December 1890.
After the death of Thomas’s father he, together with his family, moved into the Victoria and worked in the stables that were attached to the pub then finally helped to run the business.
Roland was to grow up and spend his life living at the Victoria Public House. He would have been well known by many who lived and worked in the village and would have helped out in the stables, coal yard and pub. By 1911 Roland was working as a domestic coachman, based at the pub, carrying both goods and people around the locality. 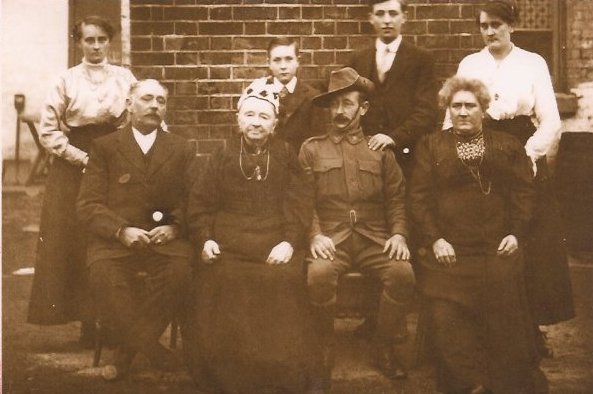 The Thorndike Family pictured in the Victoria Inn. (Courtesy of J. Gilbert)
Back (L to R): Laura Thorndike, Frank Thorndike Jnr, Rowland Thorndike & Lillian Thorndike
Front (L to R): Thomas Thorndike, Anne Waters Thorndike, Frank Thorndike & Laura Louise Thorndike.
From all that has been recoded about Roland it certainly seems that he was a very likeable young man whose kindness and cheery disposition made him a highly respected individual throughout the community. In several newspaper articles Roland has been described on many, many occasions by his peers as being ‘upright, kind and very athletic’.
Roland was certainly an athletic young man belonging to both Cliffe’s cricket team and football team. Football seems to have been Roland’s favourite sport – he was certainly an extremely good footballer, not only playing for Cliffe but for Gravesend and West Ham United! 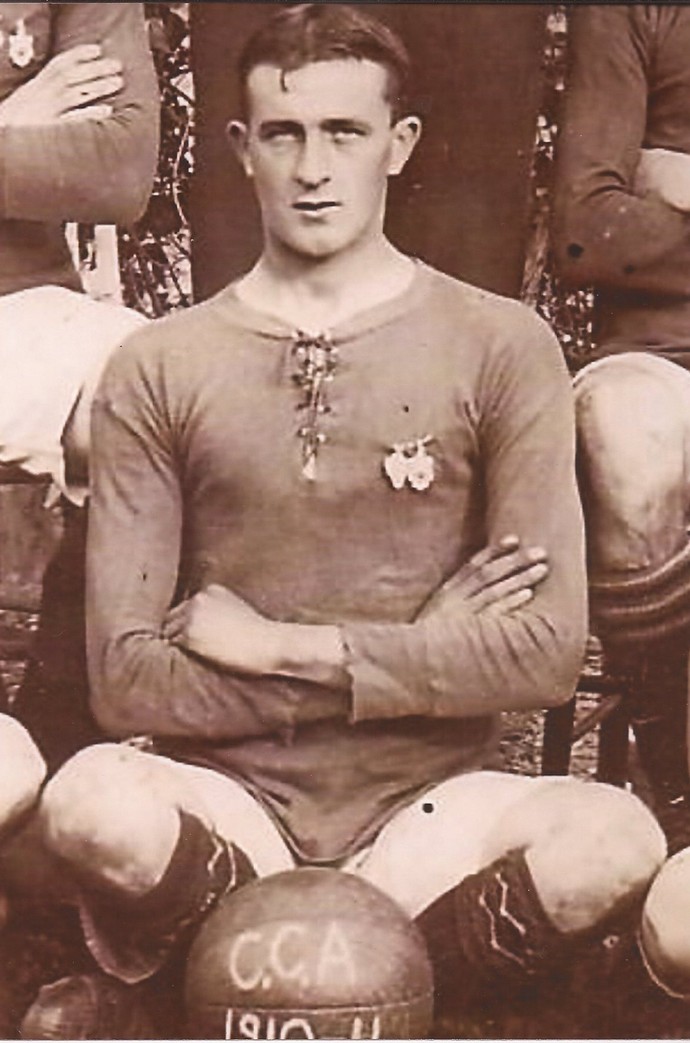 Roland Thorndike – the footballer (1910 – 11) Courtesy of J. Gilbert
At the outbreak of war Roland was to see many of his friends and acquaintances leave Cliffe to ‘do their bit’ for their country and enlist in the Army or Royal Navy. It was not long before Roland too decided to enlist to fight for his country. Why he decided to do so is unknown. Perhaps it was Kitchener’s call, the Rector’s rhetoric or an overwhelming sense of ‘fair play’ and duty. However, we shall never really know, but enlist he did.
Roland joined Royal Fusiliers and became part of its 17th Battalion. His battalion was involved in much of the fiercest fighting during the war and the horrors that he must have witnessed can only be imagined. His regiment was involved in much of the fiercest confrontations during the conflict including the battles of: Ypres, Loos, Somme, Arras and Cambrai.
At the beginning of 1917 the German armies on the Somme carried out a strategic withdrawal. They destroyed everything on the ground that they left: flattening villages, poisoning wells, cutting down trees, blowing craters on roads and crossroads, booby-trapping ruins and dugouts.
It was during the beginning of this German withdrawal to the Hindenburg Line that in early 1917, between the 10th and 11th February, that Roland distinguished himself in the field of battle.
Roland was awarded the Military Medal which was awarded for “acts of gallantry and devotion to duty performed by non-commissioned officers and men of our army in the field". 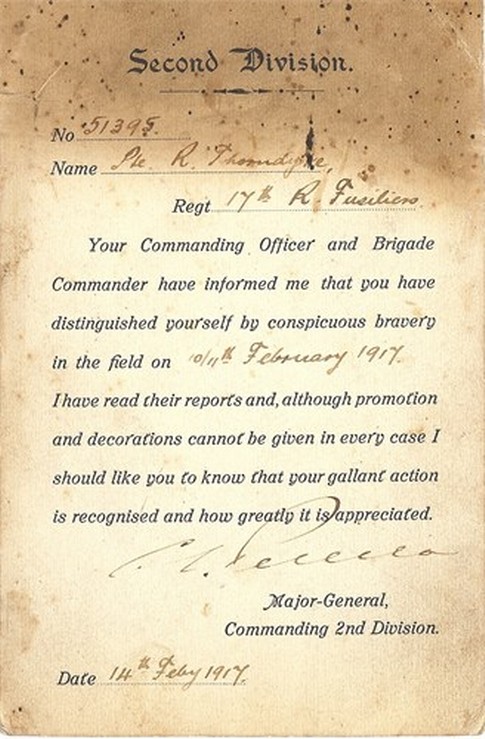 A copy of a communication he received from his Divisional Commander, Major General Sir Charles Monro. Courtesy of P. Smith

A local newspaper cutting announcing the awarding of the Military Medal to Roland.
Courtesy of P. Smith 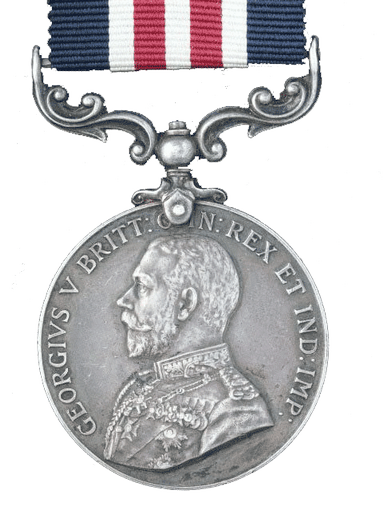 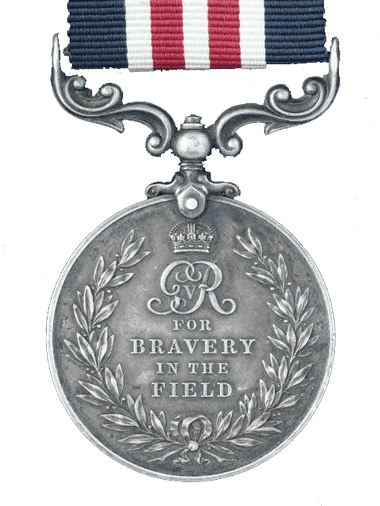 The Military Medal: awarded acts of gallantry and devotion to duty performed by non-commissioned officers and men of our army in the field and entitling the holder to add the letters ‘M.M.’ to his name.
The exact conditions that Roland found himself can best be summed up by a report by the 62nd Division who had taken over part of the front line on the night of the 13/14 February.
“Trenches as such did not exist, for they had been obliterated by the concentrated fire of the guns. The front line was held by a series of posts and dugouts which somewhat resembled islands in a sea of mud. Shell holes pock‐marked the ground, often overlapping one another and where pathways existed between them they were but a few inches wide. The holes were full of water and more than one man lost his life through slipping off the narrow pathway into the slimy mass which engulfed him.”
In March 1918 he returned home on leave, recovering from a wound he received whilst fighting in France, and he must have been very aware of so many of his friends and neighbours that had been killed or injured during the past four years.
However, Roland was looking to the future and it was during this time that he married Emily Violet Smith (Cissie). The wedding was a grand affair and must have brought hope and happiness for all involved. 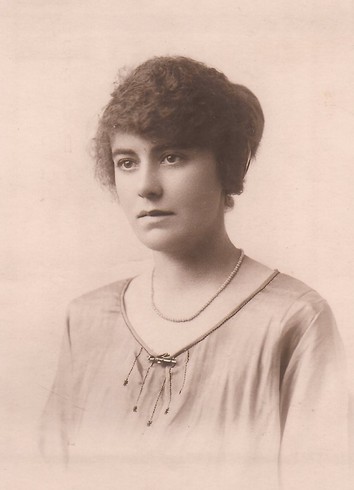 Emily Violet Smith
Courtesy of J. Gilbert
The wedding took place at St. Helen’s Church with both Roland and Emily’s sisters as bridesmaids. After the service the members of the old and new Cliffe football teams, in full playing attire, formed an archway of red and white flags: their playing colours. The horses were removed from the bridal carriage and the happy couple were instead drawn by the football team. 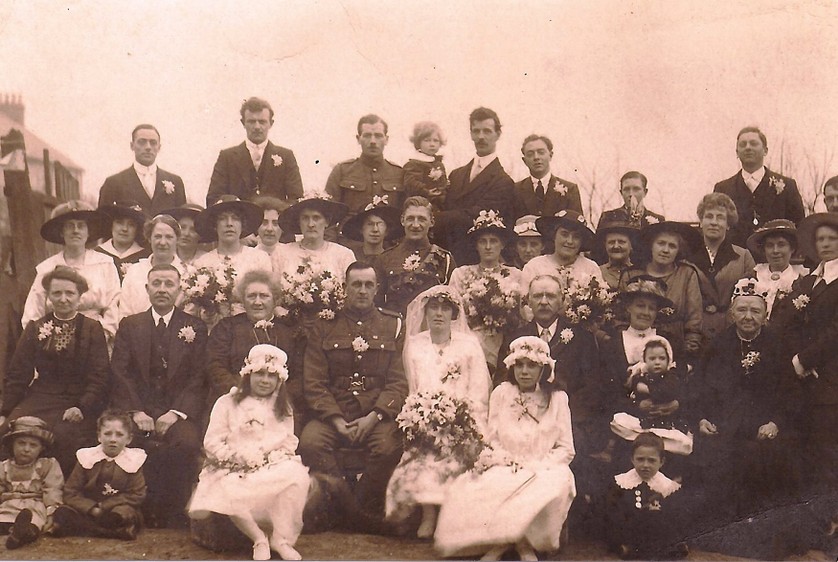 The marriage of Roland Thorndike to Emily Violet Smith at St. Helen’s Church, 6th March 1918.
Courtesy of J. Gilbert
Roland and his new wife, Cissie, made their home at 6, Turner Street in Cliffe no doubt planning their future together.
Within a short time Roland was back at the front again with his regiment to continue fighting at Amiens (the 2nd Battle of the Somme) leading to what is now referred to as the ‘Hundred Days Offensive’: the final push to the Hindenburg Line which would finally result in the surrender of German forces and the end of the war.
It is during this phase of operations for the Hindenburg Line, in the Battle of the Canal du Nord, on the outskirts of Cambrai, that Roland met his death: he died of wounds he received whilst heroically doing his duty.
Roland’s body was buried at Tincourt New British Cemetery, Somme, France. This young, kind and athletic Cliffe boy was just 27 years old when he lost his life fighting to keep others safe. 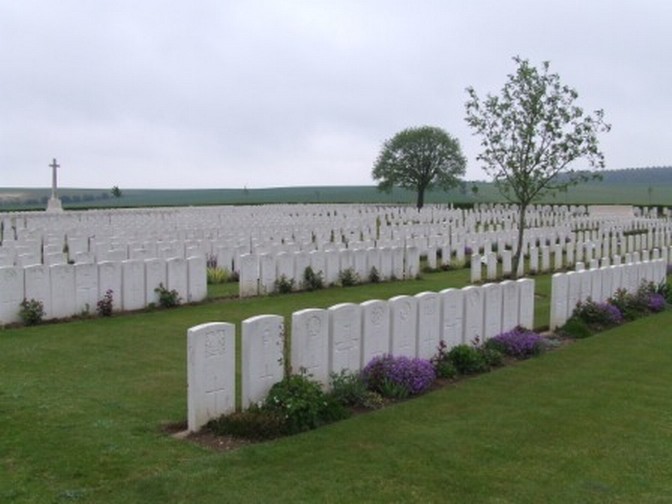 Tincourt New British Cemetery, Boucly, France
His sacrifice was not forgotten then…………… 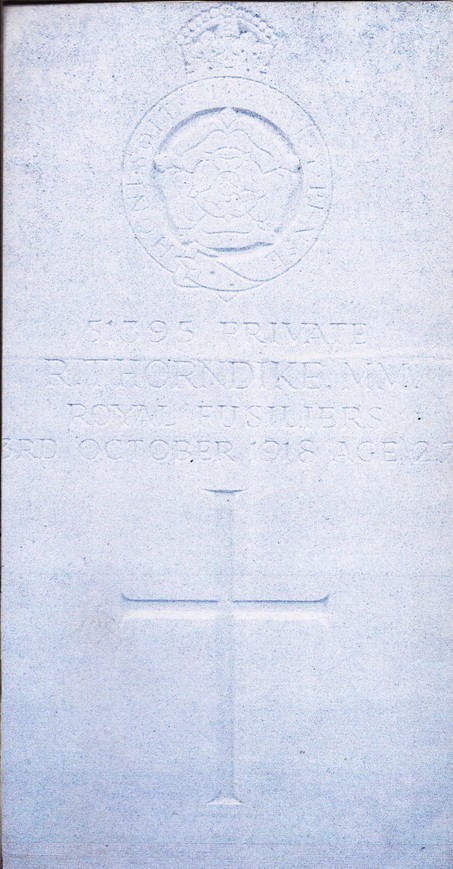 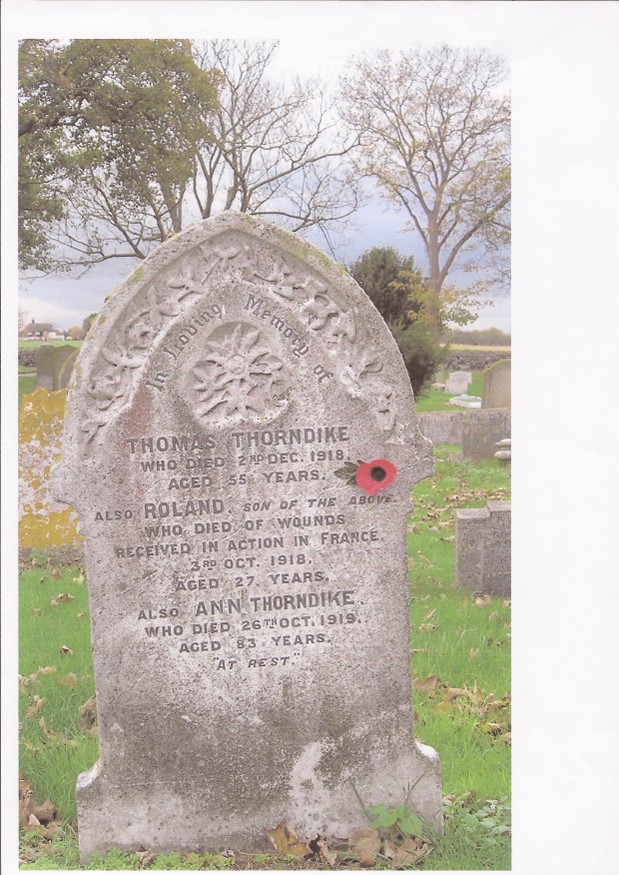 Remembered on his father’s tombstone in St. Helen’s Churchyard Courtesy of J. Gilbert.
Back to content