×
Go to content
The Manorial System: an introduction
Birth of the Manors
What are manors? In the early Saxon landscape families formed, what we would now refer to, homesteads. An extended family would live and work together and, as time went by, these ‘homesteads’ grew until they were sufficient in size to be recognised as hamlets. It is likely that these hamlets would contain, amongst other buildings, a main house and a hall: quite usually a simple rectangular building where ‘villagers’ would gather to meet, discuss business and eat. Where some of these hamlets grew larger and the inhabitants controlled larger areas of pasture, farmland and woodland   the hall also grew in importance. Like many villages and towns in England, the village of Cliffe was made up of  several different settlements each containing their own hall.
It wasn’t until after the Norman Conquest that manors and manorial estates became more uniformly structured to tie in with the feudal system and the defence of the realm.
The feudal system started to break down by the latter part of the Middle Ages and was finally abolished in England   in 1660.
Medieval Manors
The basic Medieval Manor House did vary in size according  to the wealth and importance of those who resided there. Manors were often built and lived in by those known as  ‘Lords of the Manor’ and his family. There were areas where the ‘Lord of the Manor’ had several manors and so those not   occupied by the lord would be looked after by a bailiff or   rented out to tenants. However, not all manors were held by lords, owing   service to their superior or directly to the throne, but to   the Church. It is estimated that well over 25% of all manors had some ecclesiastical ownership and that these manors were often larger and had a greater workforce to rely upon.
Here at Cliffe, with its strong and important ties to the church, it is not surprising to find more than one   ecclesiastical manor. The lands belonging to the Manor, the lord’s domain  or demesne, should be enough to support himself and his family. Later in the medieval period it was assessed as being enough to support not only the lord’s family but weapons, armour, horses and equipment to support a cavalryman. This ‘tax’ or ‘levy’ was known as a Knight’s Fee.
In  Cliffe, in 1253, the holders of the Knight’s Fees were recorded as being: Matheus Sibby, Petrus de Schirlonde & Johannes Salamon. (Tenent   dimid. feod, in Clyve de Archiepiscopo.)
[J.Greenstreet, Arch. Cant. XII,   226]
Any surplus land was then divided up into   small strips and offered to the village peasants and they   became his tenants. The land rented by the tenant was often in small sections in various areas of the manor. In one of these small pieces of land the tenant/peasant would build a   home for himself.  Some land was left for all to make   use of and this was known as ‘common land’ where all the   tenants could use to graze animals and cut hay. There was  also land belonging to the lord of the manor that was not   available to the freeman or villein which was neither  cultivated nor enclosed: this was known as manorial waste   land. The ‘waste land’ of the manor was an active part of   the lord’s manor and would be looked after. Nowadays, since   many of the lords of the manors no longer exist and the   manors have been sold off or destroyed, many of ‘waste   lands’ are still in existence although the manors are not. 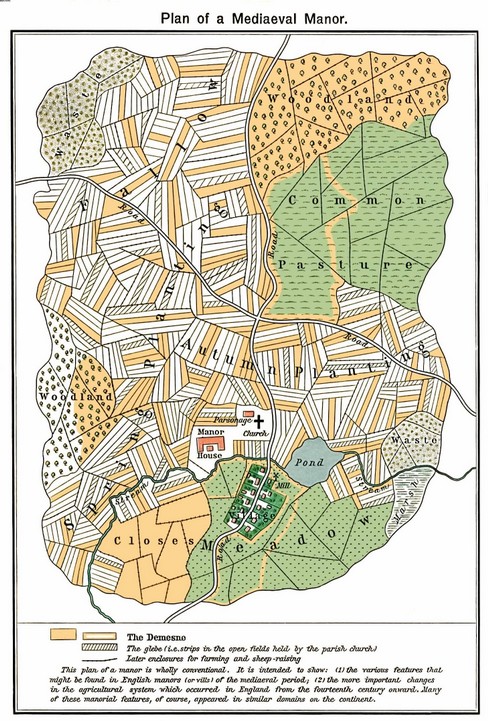 Not all tenants were the same – there were two main  types: the freeman and the villein.
The freeman was as it sounds, a man who paid a fixed   sum of money as rent and held land by deed. The villein on the other hand worked on the lord’s land for an agreed   amount of days in payment for his land.
All tenants, regardless of their status, had to   attend the manorial court, held usually in the manor house and, from 1270 onwards, the dealings of   these courts were recorded on court rolls. The names of  Berry Court, West Court, Courtsole are reminders of these manorial courts and the Court Roll from Priors Hall and  others give us an insight into the dealings of the time. As  it became usual for the villein to be given a copy of the   entry in the court roll relating to his holding, such tenure became known as copyhold. In the 16th century copyholds began to be replaced by leaseholds. The 1922 Law of Property  Act finally abolished copyhold tenure.
Another peasant, who often lived at or by the manor,  was a Yeoman. A yeoman quite often owned his own land and often farmed it himself. His land would not be as vast as  that of the lord and would cover only a few acres: not any larger than 150 acres in general. A yeoman of the medieval period was required to be armed and trained with a bow and   those that could afford would be expected to be trained and armed with a sword, dagger and the longbow. These yeomen   were often sought after to aid in the protection of the  nobility.
In some areas of the country the Manor House continue to grow and develop: some became fortified buildings whilst others, certainly in the 15th & 16th centuries,  became more convoluted in design incorporating a large  number of rooms, courtyards, outbuildings and gardens. This  did not happen here at Cliffe.
There were times when a survey was called for on a manor – this listed all property, land and its size and type, tenants and their rents or services. When a lord of a  manor, who held the manor for the throne, died a special  survey was completed which not only listed all the above but  quite often also incorporated all the buildings too.
The demise of the manors and the manorial system appears due, in part, to the nature of inheritance and this is explained in more detail in the Property and Land Ownership section of the website.
Much of what we know about the manors that were part of Cliffe come, in part, from the Court Rolls, Charters and deeds that have survived from the period.
Back to content