×
Military Matters
Crash of De Havilland Swallow DH108
After the end of WWII various nations were in pursuit of testing new concepts in aviation design utilising the power of jet engines and swept back wing design. Britain was no exemption and this story revolves around British aviation pioneer and aircraft engineer, Sir Geoffrey De Havilland, and the De Havilland aircraft factory in Hatfield, Hertfordshire.
A standard Vampire fighter had been converted by removing the twin tail booms and swept back wings fitted and a Goblin II engine (D.G.N.36/2, serial 1017/A.454516 Mark II) especially designed for the purpose, fitted to create the experimental aircraft  De Havilland DH108 –  the ‘Swallow’.
This new aircraft was to be flown by world renowned test pilot Geoffrey De Havilland, the eldest son of Sir Geoffrey, aged 36, he had carried out a large number of prototype tests and had acted as a demonstration pilot for the firm's aircraft all over the world. With 5,220 hours in his logbook, he was certainly an experienced flyer.
It was decided to carry out a practice flight in preparation for an air speed record attempt later in the year. The area chosen was to be the Thames Estuary as test flying, being quite hazardous by its very nature, afforded a largely unpopulated area should anything go amiss.
The Swallow, serial TG306, took off from Hatfield at 1726 hours for a short test flight. The intentions were that De Havilland would do a shallow dive from 10,000 feet up to Mach 0.87, followed by a level speed test up to 650 mph. At 1739 the aircraft was seen a few miles NE of Gravesend travelling towards Cliffe, and what a sight it must have been to onlookers: a futuristic design, glinting in the sunlight with the roar of its 3300lb thrust turbo-engine.
At 8,000 feet it powered towards the speed of sound when suddenly all was to go quiet: the Swallow had disintegrated and the wreckage fell into the mud at Egypt Bay.
Examination of the wreckage showed that the aircraft disintegrated due to down loads on the wings, with the starboard wing being the first component to fail. A report from the manufacturers states:
"The results of the high speed wind tunnel tests have shown that at high Mach numbers there is a loss of elevon effect in the pitching plane which later changes to a reversal of control: this is accompanied by a nose down change in trim, and reduced longitudinal stability. It is thought that these features probably are the basic cause of the accident since their combined effect could result in the aircraft nosing over into negative incidence without the possibility of recovery".
In all, three DH108 Swallows were constructed, and all three eventually claimed the lives of their pilots.
Geoffrey De Havilland's body was washed ashore at Whitstable on 7th October 1946. 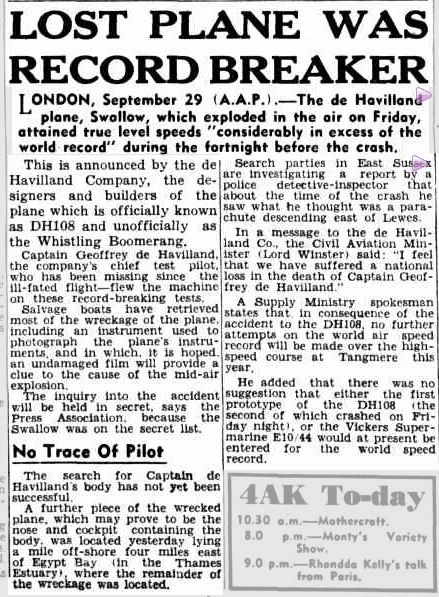 The accident was world-wide news - above is a report from the Brisbane Gazette, Australia. 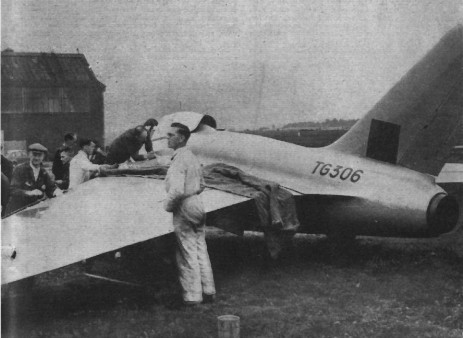 Geoffery De Havilland with the 'Swallow' just before take off. 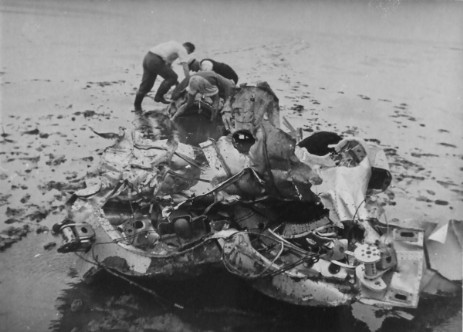 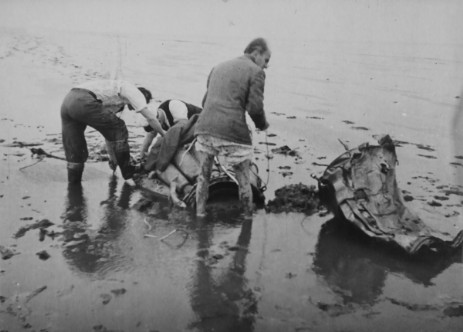 Recovering the reamins of the aircraft from Eygpt Bay
In a recent television documentary on the amazing Captain Eric 'Winkle' Brown he said that he flew one of the two remaining aircraft at Farnborough in the late 1940's and thinks of it as a death trap. The cockpit hood was very low and as a small man he thinks he was lucky not to smash his head on it when he experienced heavy "buffeting". He recovered the aircraft OK and is of the opinion that as a very tall man Geoffrey de Havilland Junior may well have been hurt in this way and lost consciousness while experiencing the same conditions.
Home | History | Places | People | Military Matters | Photos | Nearby Villages & Links | General Site Map
© 1993 - 2015 - Cliffe History
Back to content | Back to main menu