×
Go to content
St. Helen's Church
Walkround Guide
ST. HELEN lived in the 4th century AD and was the mother of the Emperor Constantine. She was highly venerated in the Middle Ages as it was generally believed she had been privileged to discover the Cross of Christ, or part of it.
The present church building has been preceded by two earlier structures. According to ancient records, a Saxon Church stood here in AD 747. No trace of this remains. Some foundation walls of the former Norman building were discovered east of the present Lady Chapel during building excavations in 1897.
THE NAVE, TRANSEPTS AND TOWER form the earliest part of the building standing today and AD 1260 is the date frequently associated with this area of the church. However, the entire building could be said to have taken from 1200 to approximately 1380 AD to reach its present extent.
THE NAVE is the great central area from the base of the tower at the west to the chancel step in the east. On most of the pillars may be seen distinctive medieval chevron markings discovered during restoration work in 1897. Towards the east end may be seen the ancient tie-beam.
High above the nave are the celestory windows added to provide extra light when the aisles were widened. Round about 1730-1732 all the roofs were lowered, made less steep and leaded. Towards the end of the 19th century the roofs were raised again to the original high pitch.
THE PULPIT is believed to be of the same period as the attached hour glass bracket which bears the date 1636. The hour glass itself disappeared mysteriously in 1967. 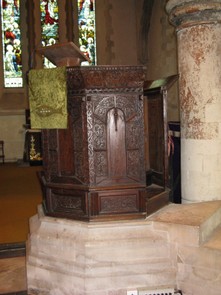 THE CHANCEL SCREEN, now seen with a new upper part (added in 1909), stands on the site of the original Rood Screen which, apart from the lower section, was destroyed by "Puritan violence". At the north end of the top of the existing screen, the doorway which led out on to the 14th century Rood may be observed.
THE CHANCEL AND SANCTUARY are some 100 years younger than the Nave. The original chancel and sanctuary of the 13th century were destroyed by fire in AD 1350. This area was again extensively repaired and restored towards the end of the 19th century following damage by the Puritans and subsequent neglect and indifference over many years.
The present large east window has been re-constructed partly on the basis of fragments of tracery discovered during the 1870's. It is thought to be a near replica of the fine window which was here before the roof was lowered in 1732. What fragments could not be re-used were placed as a parapet on top of the school wall facing the south porch. They are still in position there today.
THE CHOIR STALLS were renovated, repaired and added to during the restoration work of the 19th century when more poppy-headed benches were obtained from an Augustine Priory in Leicestershire. Originally there were just six stalls. Each of the back seats are misericords. 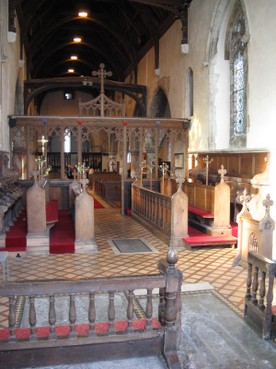