×
Go to content
Cliffe Fort
At the northern border of Cliffe Parish, where it meets the River Thames, stands Cliffe Fort. Cliffe Fort is one of 5 surviving coastal forts in the Thames and Medway; the others are Coalhouse, Garrison Point, Hoo and Darnet. All are these are Royal Commission Coastal Forts, built in the same period 1860-70, and are casemented coastal batteries. Each is different in terms of layout and design. Slough Fort also exists and has recently undergone a degree of restoration, but is substantially smaller than the other coastal forts. There are also remains of two others, Shormead and Grain.
The point at which Cliffe Fort was built was carefully chosen as it stands at the point where the Thames Estuary suddenly narrows and on a bend in the river making the site an ideal spot to hamper and deny enemy shipping to access London. Together, with other river defences at Shornmead Fort and Coalhouse Fort, formed an outer line of defence with Gravesend and Tilbury Forts, a little further upstream, forming an inner defence line. 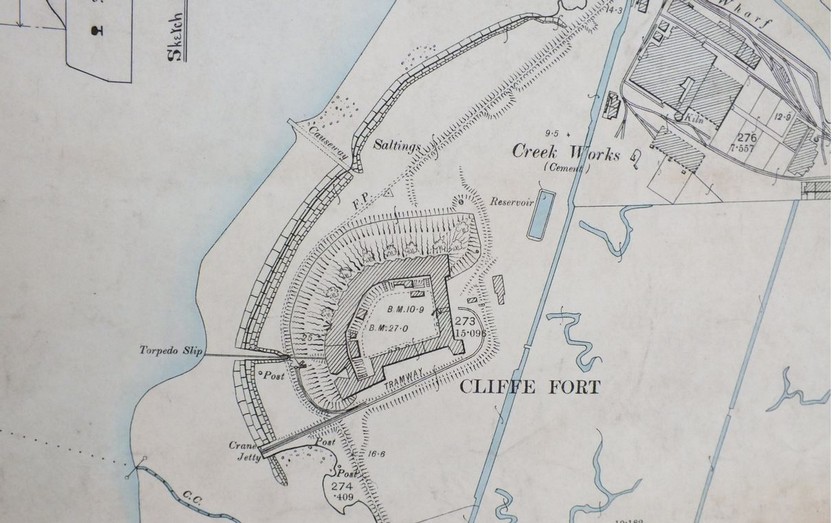 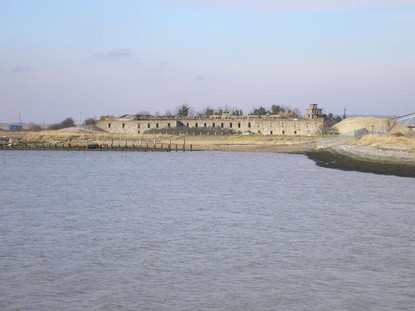 Cliffe Fort as it is today
In 1861 gravel was found at a depth of sixty feet and chalk at seventy-nine feet.  The fort required thirty-foot long piles but still encountered problems.  Reports from 1865 showed difficulties including subsidence and cracking.  The fort, when complete, was much smaller than planned with only ten guns within the casemates.  Underneath the casemates were two parallel tunnels, one a passage connecting the shell and cartridge stores and the other a lighting passage.  The lighting passage was a narrow tunnel and had many offshoots with steps leading up to light recesses within the walls of the main tunnel.  You could also find these light recesses within the walls of the shell and cartridge stores, the recesses were constructed to prevent explosive material coming into contact with the naked flame of the lamp, this was placed within the recess and would be protected by a glass front and a glass door behind giving access from the lighting tunnel.  A dry ditch and earthworks on the seaward side further protected the fort; it was built for a compliment of 300 men although, apart from troops from various regiments involved on gun drill or on exercises, it was normally manned by a much smaller garrison. 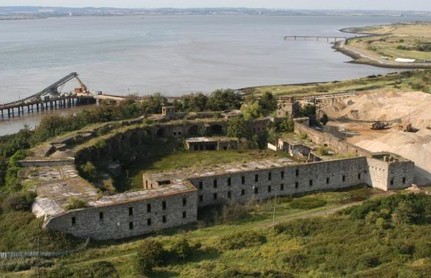 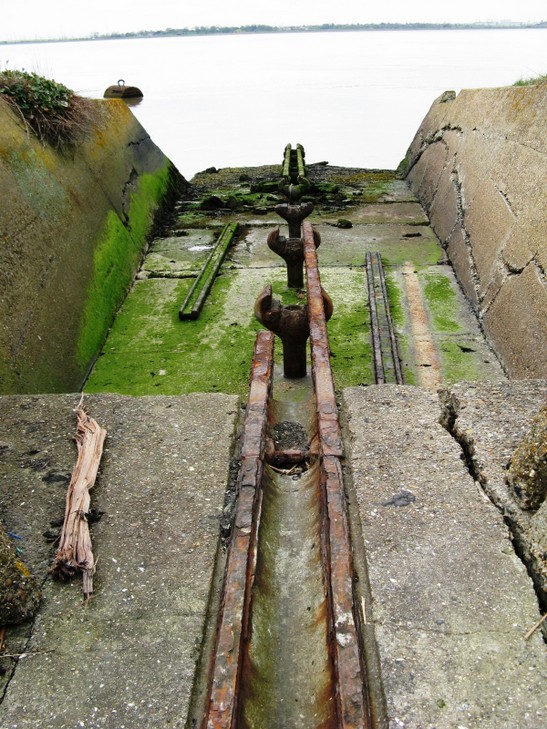 Brennan Tordeo Rails
Today Cliffe Fort shows signs of neglect and has seriously deteriorated over the past few years and the Scheduled Monument is now badly flooded, the parade ground is under at least one foot of water with the magazines, access tunnels and lighting tunnels under at least two feet of water.  Standing derelict many features remain at the fort, including gun rings, rails and other features within the casemates, gun emplacements, observation posts and shelters upon the roof, two Brennan Torpedo launching rails leading into the river and the retractable observation post for the torpedo.  Although access is possible it is not easy and is very dangerous: it is strongly advised that no attempt should be made to enter the site! It is also on private property and all access is denied. Inside there are many hidden dangers including a deep well that is hidden by the flooding water inside and crumbling roofs, floors and walls that may not hold a person’s weight.
Cliffe Fort, is privately owned, and lies in an area that is use commercially, and this involves the use of machinery and heavy moving plant. There are number of additional significant monuments in the area, included the Lime Kilns and Romano-British cremation and burial site. The fort lies within the area of The Thames Estuary and Mashes SPA and is a designated RAMSAR estuary and wetland, and there is the RSPB Cliffe Pools reserve adjacent to the site.
More can be found in the following:
V. Smith in Defending London's River, The Story of the Thames Forts.
Ian V Hogg, Coastal Defences in England and Wales 1586 – 1956, Newton Abbot, 1977
J.D. Wilson, Later Nineteenth Century Defences of the Thames, Journal of the Society for Army Historical Research, XII. 1963
A.D. Saunders, Tilbury Fort and the Development of Artillery Fortifications in the Thames Estuary, Antiquaries Journal, XL 1960
The National Archives, Kew
Back to content