×
Go to content
The Hundred of Hoo Railway
The Hundred of Hoo Railway had been opened by   the South Eastern in 1882 to capitalise on the   anticipated growth of Port Victoria on the Isle   of Grain into a major continental port in   competition with the rival London Chatham &   Dover Railway's operations on the Isle of   Sheppey.
The North Kent Extension Railway   was granted authority to build a line from the   South Eastern Railways track at Gravesend across   the marshes to a pier on the west bank of the   Medway opposite Sheerness in 1865.
On   April 1st 1882, the first section from Hoo   Junction to Sharnal Street was opened with the   remaining section to Port Victoria opening on   September 11th 1882 by which time a wooden pier   and a hotel, the Port Victoria Hotel, had been   provided.

Sharnal   Street Station
At first there were only two stations between   Gravesend and Port Victoria at Cliffe and Shanal   Street until 1906 when new halts were added to   serve villages at High Halstow, Beluncle, Middle   Stoke and Grain Crossing. Between Cliffe and   Gravesend further halts were established at   Milton Road, Denton and Milton Range.
By   1916 the pier at Port Victoria began to become   unsafe and by 1931 no trains were allowed onto   it and a temporary wooden platform was built at   the landward end while a basic concrete platform   was completed on safer ground.
The line   was always thought to be a favourite with the   Royal Family and certainly use was made of it by   them as can be seen by the information sheet   below.

In 1932 The Southern Railway opened a   single-track branch line from a new station at   Stoke Junction to Allhallows on Sea believing   that the new seaside resort would be popular.   Six trains a day were provided, two of these to   and from London. They even built a station hotel   but to no avail as holidaymakers seemed to shun   this new seaside resort.
However,   Southern Railway, in 1935 still saw a future for   the line and built a second platform at Cliffe   and Sharnal Street together with doubling the   branch line to Allhallows. The popularity of   Allhallows was improving by the late 1930's and   the Southern Railway considered doubling the   whole line. The proposal was put on hold on the   outbreak of war in 1939 and was eventually   forsaken at the outbreak of World War II. 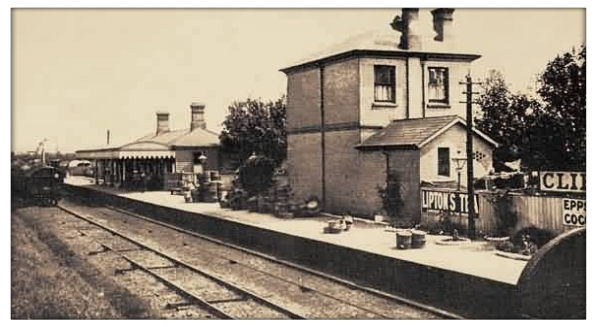 During the war the line was well used with   the oil terminal being adapted as the base for   PLUTO (Pipeline under the Ocean). For more   information on PLUTO please refer to an article   dispayed on 'Kent Past - The History of Kent'   website
here.
Soon after the end of the war   the Anglo-Iranian Oil Company built their   largest refinery in Britain at Grain. Extensive   rail facilities were provided and from 1951 Port   and Grain Crossing Halt were closed while a new   Grain Station was constructed east of Grain   Crossing. The new station had a long single   island platform and a large brick signal box and   was intended primarily for the use of workmen at   the oil terminal.
With the increase in   of freight traffic it was suggested that line   was to be electrified but, as the traffic   continued to deteriorate the line went back to   single track in 1957. 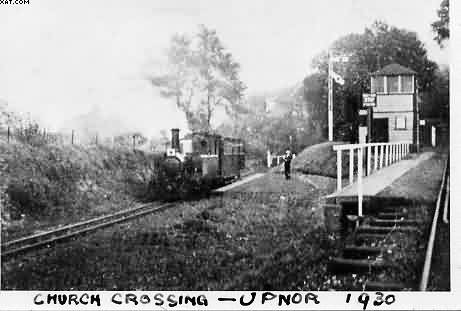 Upnor   Crossing c. 1930
The situation remained the same until the end   of 1961 when the passenger services from Hoo   Junction on the Gravesend line to Grain and the   branch to Allhallows were withdrawn: this was   before the infamous "Beeching Report" of 1963   which saw the pruning of many branch and   secondary lines.
The station   buildings at both Cliffe and Sharnal Street were   finally removed in 1966 apart from the signal   box at Cliffe which, in 1973, was completely   demolished.
The Hundred Of Hoo Railway Story Pt. 2.
Take a trip along   the Hundred of Hoo line with this video.

...and continuing from High Halstow towards Port Victoria.
Back to content