×
Go to content
EXCAVATIONS ON THE ROMANO-BRITISH INDUSTRIAL SITE AT BROOMHEY FARM, COOLING
by Alec Miles and reproduced by kind permission of the Kent Archaeological Society.
Eight years of emergency excavations in advance of deep ploughing on farmland at Cooling revealed an almost complete Romano-British industrial site (NGR TQ764/767) dating from the first to early third centuries ad. The excavations which were undertaken for the Lower Medway Archaeological Group over the period 1966-1974, uncovered a large wedge-shaped mound on the first-century saltings, which showed evidence of hut foundations, salt-boiling hearths and pottery manufacture; also further evidence for other mounds built up on the Roman saltings over a wider area. Information gained from the excavations will be of wide significance in resolving many long­standing problems posed by the Romano-British settlements of the North Kent marshes of the Thames and Medway.
The excavated area is on the Thameside Marshes, being part of a site possibly covering an area of 1.5ha; further occupation extends to the higher ground on the south comprising Thanet Sand with the odd patch of Woolwich Beds, currently occupied by pear orchards. The site, on land belonging to Broomhey Farm, is some 1.2km north-east of St James Church, Cooling, between two spurs that jut out into the marshes, Northward Hill to the east and Cliffe village to the west. The post-Roman rise in sea-levels has resulted in the deposit of some 0.3m of silt over the highest parts of the mounds; however the build­ing of the sea-wall nearby in Medieval times protected the site from further silting.
The site has a long history of finds. The earliest reference is in the Numismatic Chronicle (vii (1867), 7) which records a denarius of Gordian III and Tranquillina. The next reference to the site comes in Archaeologia Cantiana (XLII, 1930, xlviii), where R.F. Jessup re­ported a mound of friable soil, irregular patches of burnt material, a quantity of the poor pottery called briquetage and occasional frag­ments of a more substantial fabric. The burnt material proved to be pieces of the stem, leaves and root of a species of rush (Juncus). Among the pottery fragments were burnished black sherds of soft fine clay ornamented in La Tene fashion with cordons, and pieces of rough gritted red ware which may be perhaps referred to the culture of Hallstatt.
Three years later, a further report Arch. Cant. (XLV 1933, xliii), states that: ‘On land at Cooling belonging to Fred Muggeridge, whose excavations have previously revealed considerable quantities of pottery, a Roman kiln and two skeletons were recently uncovered’. Mr Cook reports ‘That as the graves had been cut through the layer of burnt clay and pottery debris surrounding the kiln, it is evident that the pottery was in disuse before the date of the earliest burial, which seems to be about the beginning of the second century AD. The cemet­ery consists of cremations and inhumations’. 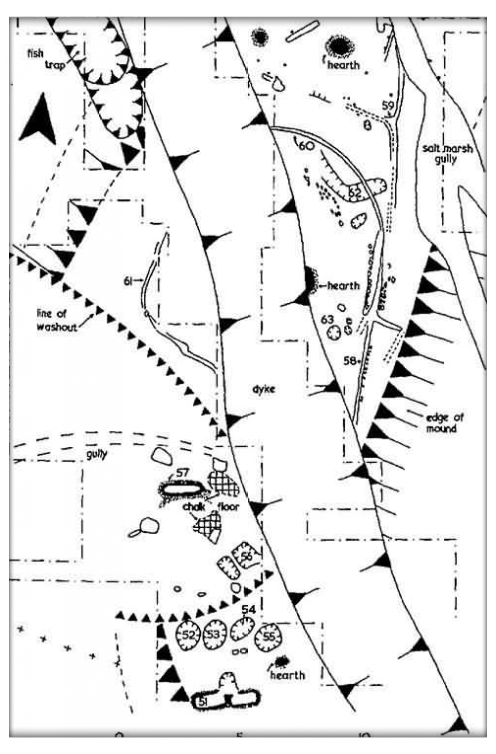 In 1936, Maidstone Museum’s gazetteer records that a local news­paper stated that nine more kilns were discovered and that pottery and briquetage from the excavations was in the Museum. In several conversations held with Fred Muggeridge before his death in 1972, further details were given. He stated that when excavating the first kiln, which was contained in a mound, a rush floor was found. Later excavations had uncovered more kilns in a row, on the slightly higher ground of the pear orchard just off the marsh (TQ 765/766); these kilns were presumably those mentioned in the newspaper report. They were not destroyed but re-covered with soil and pear trees planted between them.
More information was recovered from a series of glass photo­graphic negatives taken in the 1930s and currently located at Roch­ester Museum, Maidstone Museum and Eastborough Farmhouse, Cooling. These photographs are all of the first major kiln find, show­ing it in varying stages of excavation. They show a permanent type of updraught kiln with a solid floor with the well preserved remains of the shallow dome, the loading vent visible at the top (Swan 1984, 35, pi.4). One glass negative shows Roman pottery dating from the first and third centuries arranged around the kiln, including pottery from the adjacent cemetery and other excavations in the immediate area. In 1979 RCHME photographed the entire collection.
The site was re-located in 1966 as part of a wide ranging study of the Romano-British occupation sites (Miles 1975, 29-39) in the North Kent Marshes. On learning that within a few years the site would be deep ploughed and drained prior to changing the land use to arable farming, it was decided to undertake an emergency excavation. It was believed that the protected position of the site, safe for centuries behind the medieval sea-wall, would enable valuable and important evidence to be collected of the likely similar nature of the many other
Romano-British sites in the marsh and on the saltings which have already eroded away. The difficult conditions met on many sites washed by the tides meant that very little serious work could be attempted and accurate information was lacking.
Trial trenching was initially undertaken in 1966 to attempt to locate the sites of previous excavations and discover where it was best to lay out the new. Most trial holes showed signs of the previous excavat­ions. However, a small trench on a low mound to the west of the site revealed, immediately below the topsoil, a rammed briquetage floor with a line of stakeholes flanked by a foundation trench. It was decided to centre the excavation around this feature [Site A]; between 1967 and 1973 an area of around l,650m2 was excavated.
In an attempt to uncover the previously located kiln a series of trenches were dug at a point [Site B] 22m east of site A, where high proton-magnetometer readings and photographic evidence suggested a likely site. A further series of trenches were dug at [Site C] where trial trenching had revealed kiln debris and first-century pottery.
A major difficulty encountered was the high water table, which varied from just under the surface in mid winter to an average of 1.5m below in mid summer. Excavations were taken to a maximum depth of 4m (13ft) below the marsh surface or nearly -2m (-7ft) OD, this being some 5m (16ft) below high water, mean ordinary tides. In fact normal excavation practices were used throughout, pumps being used to keep the water just below the working levels, leaving the marsh clay damp and not allowing it to dry out. 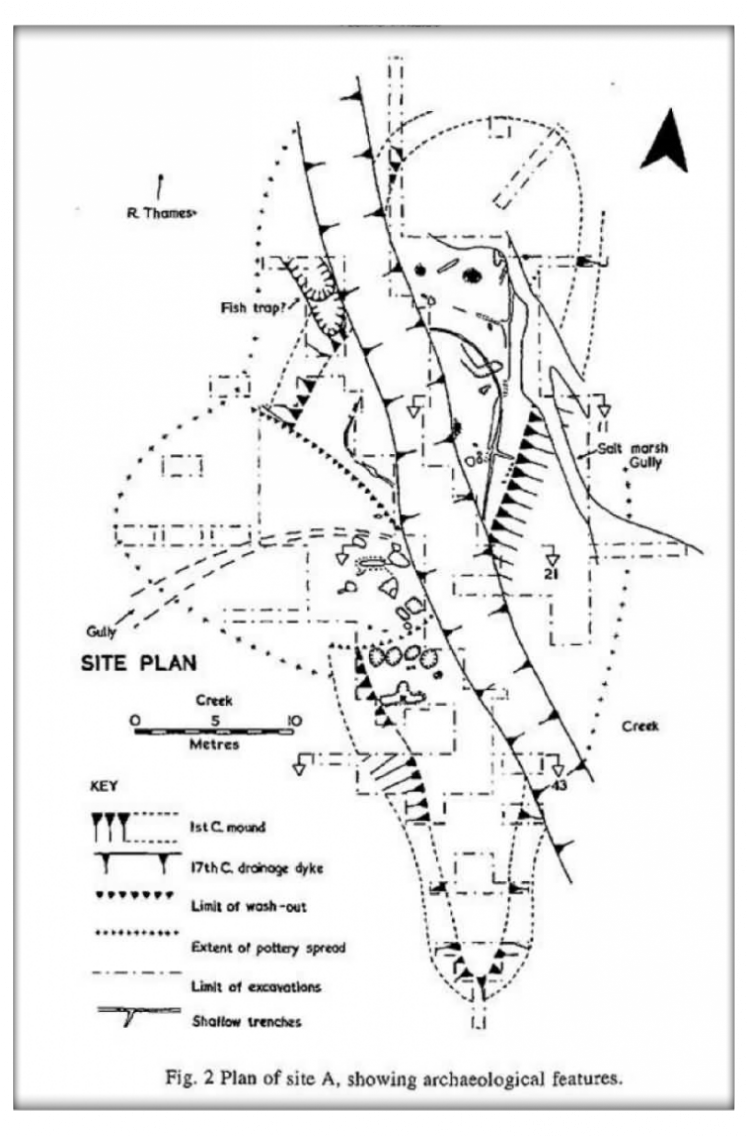 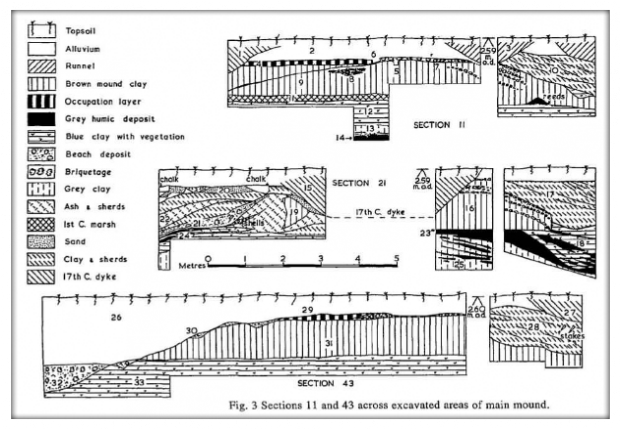 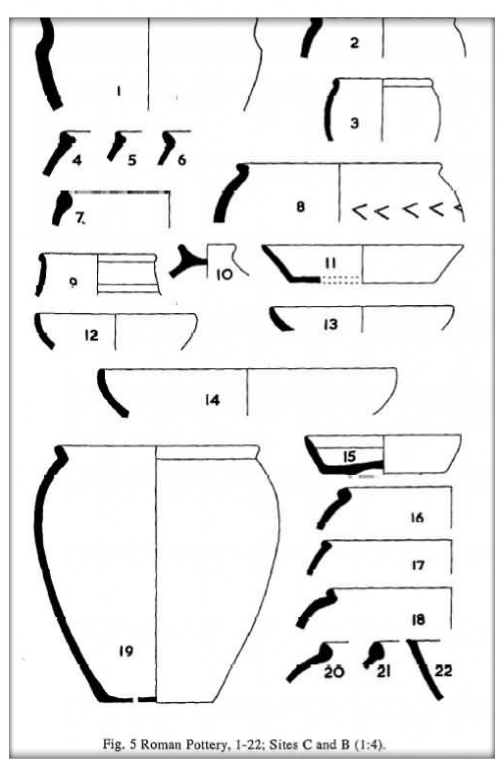 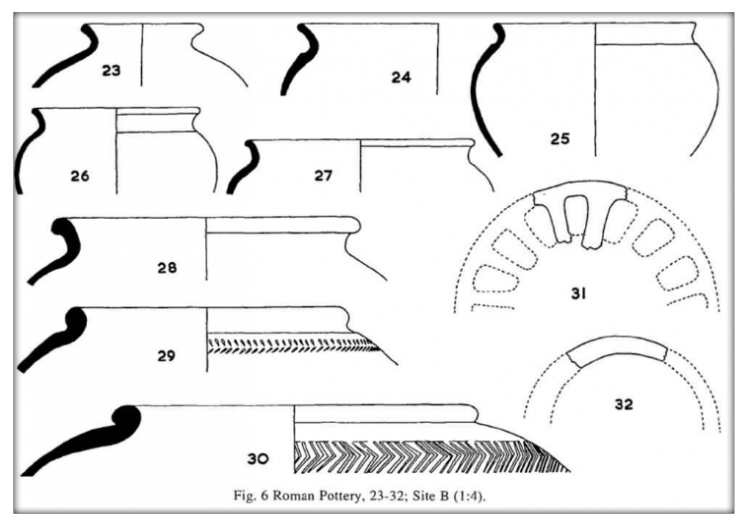 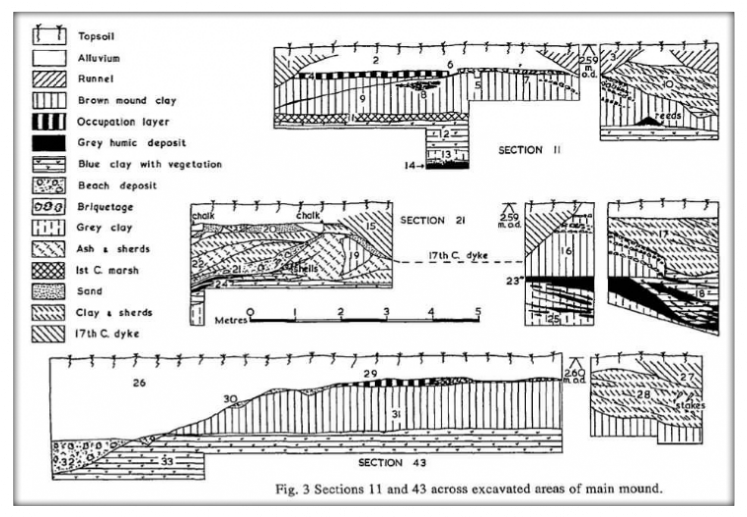 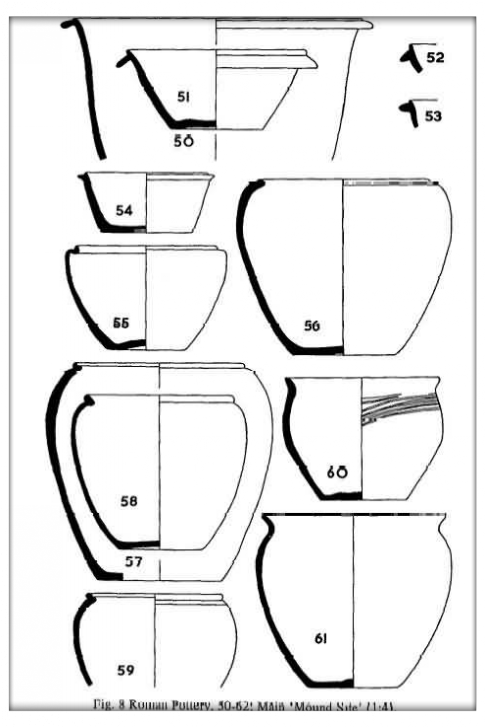 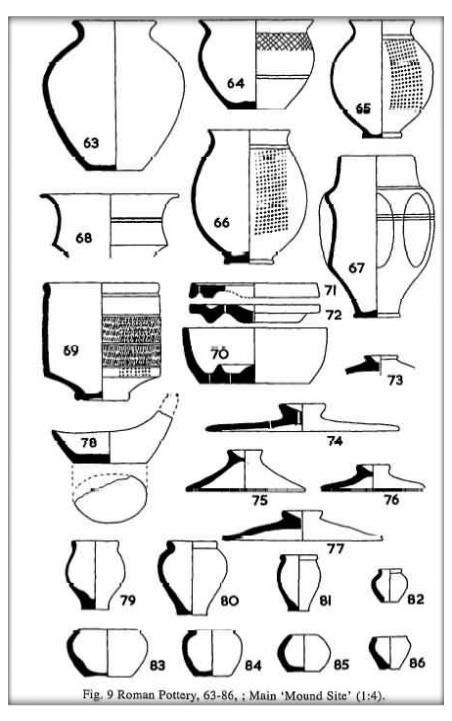 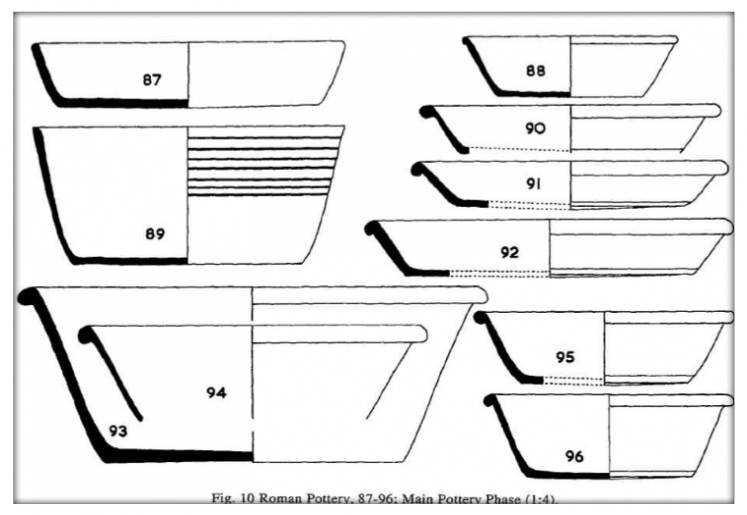 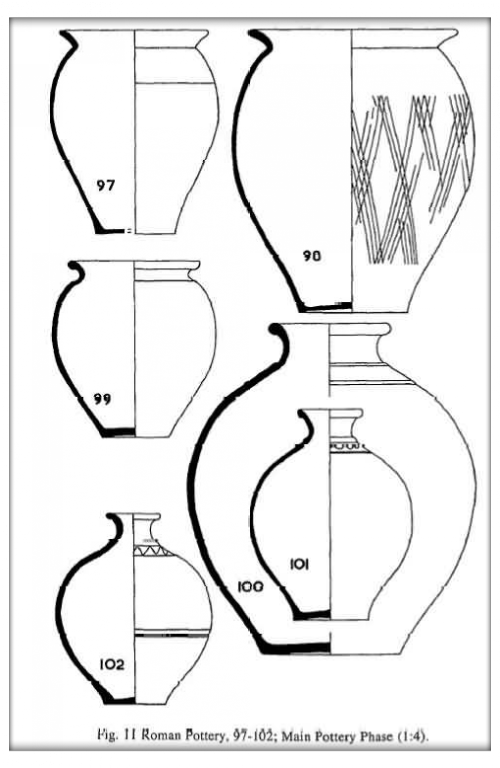 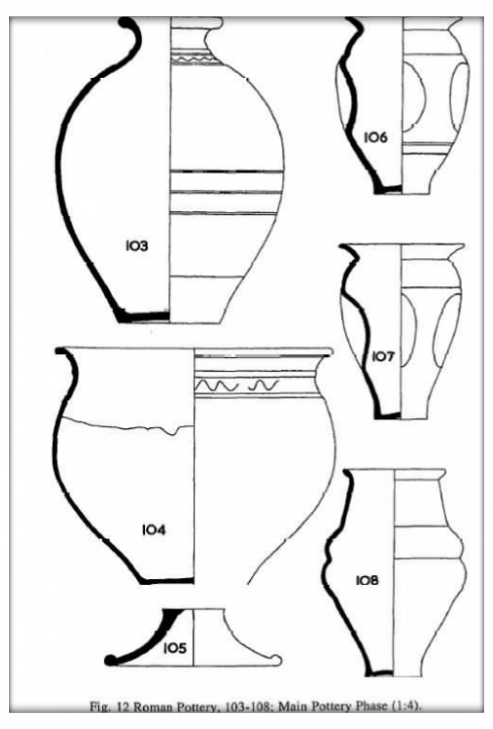