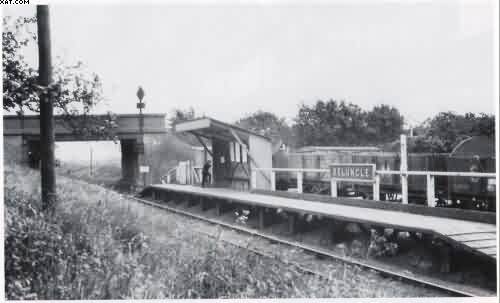 Beluncle Halt
Thomas the second son had this manor of Beluncle by   devise from his father, and was afterwards knighted. He   changed his arms to, Gules, on a chewron or, three crescents   sable, which coat was borne by all his posterity of this   place. He resided here, and having married Agnes, daughter   of Sepham, of Sepham, in this county, was succeeded by his   son and heir, Thomas de Cobeham, who was likewise of   Beluncle, and lies buried in Cobham church, with Maud his   wife. His descendants afterwards continued to reside at   Beluncle till, at length, John Cobham, esq. succeeded to   this manor, and was alderman, and some time mayor, of the   city of Rochester, where he resided, and in 1624, was a   benefactor to the church of St. Nicholas there, by setting   up the north window of the chancel. He married Elizabeth,   daughter of James Ballandine, of Derbyshire, by whom he had   two sons, John and William, and a daughter Elizabeth. He   died in the reign of king Charles I. leaving his wife,   Elizabeth, surviving. Some time after which this manor   became divided into moieties, one of which became vested in   colonel Richard Cobham, of Rochester; and the other in   Clement Chadbourne and Elizabeth his wife, one of the   daughters of John Cobham, alderman, late of Rochester.
Clement Chadbourne and Elizabeth his wife, in 1708,   conveyed their undivided moiety of this manor to colonel   Richard Cobham above mentioned, who died without male issue,   leaving two daughters his coheirs, the eldest of which,   Mary, carried one moiety of this manor in marriage to   captain James Hayes, of Rochester, who bore for his arms,   Gules, a chevron or, between three boars heads couped; who   having purchased the other moiety, became possessed of the   whole, and died in 1755, without male issue, leaving two   daughters and coheirs, the eldest of whom Jane, carried it   in marriage to the Rev. Mr. Js. Parsons, of Botherep, in   Gloucestershire, who, in 1788, sold it to Richard Webb, esq.   and he is the present owner of this manor. There is no court   held for this manor.
ABBOT'S-COURT , now corruptly called ABBEY'SCOURT , was formerly the mansion of an estate   here, called the manor of Little Hoo, alias Hoo Parva, which 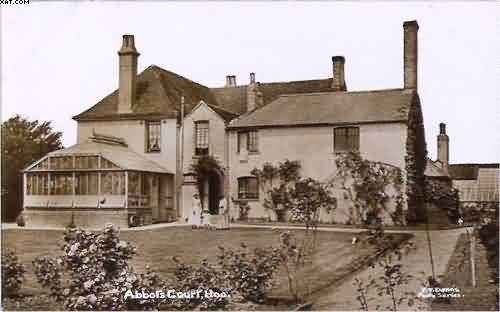 The churches of Halstow and St. Mary's, as well as that of   All Saints, now called Alhallows, in this hundred, were   accounted but as chapels to this church of St Warburgh. In   1724, Laurence, bishop of Rochester, by his instrument,   reciting that the chapels of Halstow and St. Mary of Hoo had   been beyond memory pensionary to the church of St. Wer   burge, as to their mother church, viz. the former in two   marcs, the latter in half a marc; of which annual pensions   the church of St. Werburge, and the rectors of it, had been,   as then plainly appeared, in possession for more than forty   years before his time, confirmed them to the said church;   and for the greater security of this matter, he decreed,   that the parsons, who should be instituted in those chapels   in future by the religious, to whom he had formerly granted   the church of St. Werberge, with all things belonging to it,   to their own proper uses, should, in the presence of him and   his successors, having taken an oath for that purpose,   promise to pay the pensions as above mentioned. (fn. 14)
The church and vicarage continued part of the possessions of   the priory of Rochester till the dissolution of it in the   32d year of king Henry VIII. when it was surrendered into   his hands; and the next year the king settled this church   and vicarage, by his dotation charter, on his new erected   dean and chapter of Rochester, where they now remain.
This vicarage is a discharged living, in the king's books,   of the clear yearly certified value of 46l. 3s. the yearly   tenths of which are, 1l. 17s. 7d. (fn. 15)
On the   intended abolition of deans and chapters, after the death of   king Charles I. this parsonage was surveyed and valued in   1649, when it consisted of a parsonage and manor belonging   to it, with the tithes of all manner of corn and grain, and   a fair manor or parsonage house adjoining to the church   yard, with the garden, orchard, and yard, containing, by   estimation, one acre, and other lands, which manor house,   and its appurtenances, together with the tithes, were valued   at one hundred pounds per annum. All which, as well as rents   of assize, and perquisites of courts, lands, &c. were let by   the late dean and chapter, among other things, in 1638, to   James Plumley, at the yearly rent of twenty pounds and two   good capons, or four shillings in money, for the term of   twenty-one years; but the premises, with the lands, were   worth, upon improvement, over and above the said rent, the   yearly value of 122l. 16s. 7d. the widow Plumley being then   the immediate tenant of them; that the lessee was to repair   the premises and the chancel of the church; that the   patronage of the vicarage, worth sixty pounds per annum, and   upwards, was reserved by the dean and chapter, Mr. Lewis   Howard being then incumbent of it; that there was due by   custom from the rectory to the vicar, and payable annually   at Christmas, a seam of wheat, a seam of barley, two bushels   of peas, and a load of straw. There is a manor now belonging   to the parsonage.
Back to content