The Fallen
This page is dedicated to those Cliffe villagers who gave their lives during the Great War of 1914 - 1918. 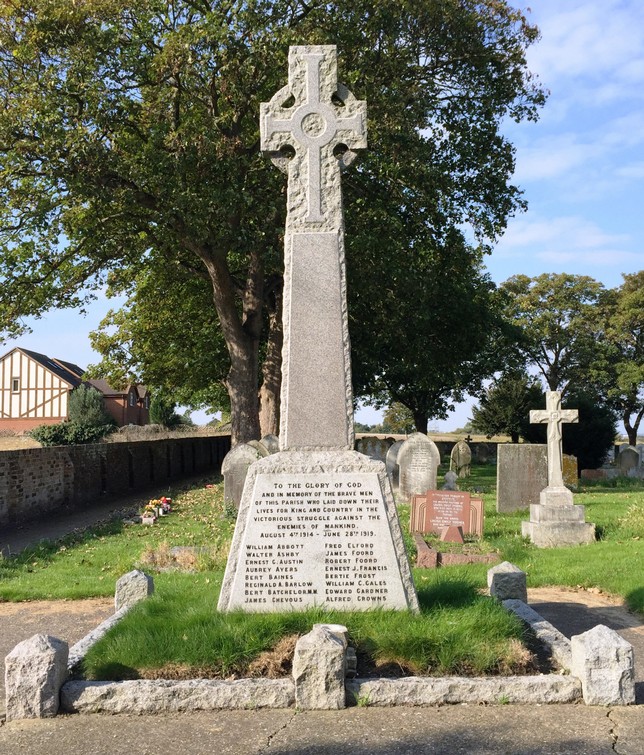 The War Memorial at St. Helen's Church, Cliffe.
This Memorial cross was unveiled on a Sunday afternoon in 1920 by Major-General H. F. Thuillor CB in the presence of a huge gathering. The memorial is of an Iona Cross carved from Aberdeen granite and designed and by Mr. J. H. Durrant of Rochester.
It was erected at the cost of £255: the money raised was £277 with the balance of £22 to be set aside for it's upkeep.
The Memorial stands just inside the churchyard by the main entrance and contains the names of most of those who gave their lives in the Great War. Others were recorded elsewhere in nearby Methodist chapels in Cliffe & Spendiff.
On the front of the Memorial stone it reads:

"To the glory of God and in memory of the brave men of this parish who laid down their lives for King and Country in the victorious struggle against the enemies of mankind. August 4th 1914 to June 28th 1919."

Later, after the end of hostilities of WWII, the names of those who lost their lives in that conflict were also inscribed upon the Memorial.
Below is a list of those who fell, some open out giving more detail upon the individual.
The Fallen