×
Go to content
Bertie Baines
1890 - 31st July 1917
Bertie was born in 1890 in Colchester, Essex and his parents were Harry Baines, who was a groom & gardener, and Alice. Not a great deal is known about Bertie's early life but, according to the 1911 Census, by the age of 22 he was still living with his parents and working as a farm labourer in Thundersley, Essex: this however was not to last.
On 19th June 1911 he married Lillian Amelia Bolam in St. Leonard's Church, Bromley, East London. Lillian  was from Stepney and, before her marriage to Bertie, worked as a cook. They had one daughter, Lily Baines.
After getting married they moved to live in Cooling Common and it was from there that Bertie decided to enlist and join the Bedfordshire Regiment.
During the time Bertie was with the 4th Battalion Bedfordshire Regiment they were involved in the following actions:
July 1916 Mobilised for war and landed at Havre joining the 190th Brigade of the 63rd Division which engaged in various action on the Western Front including; The Battle of the Ancre, a phase of the Battles of the Somme 1916 (13-18 November 1916)
1917
The Operations on the Ancre, The Second Battle of the Scarpe, The Battle of Arleux, The Second Battle of Passchendaele, The action of Welsh Ridge, The Cambrai operations.
It is recorded that Private Bertie Baines was to succumb of disease and die at the end of July, 1917.
His wife, Lillian, would remarry a decade later to Robert E Martin. 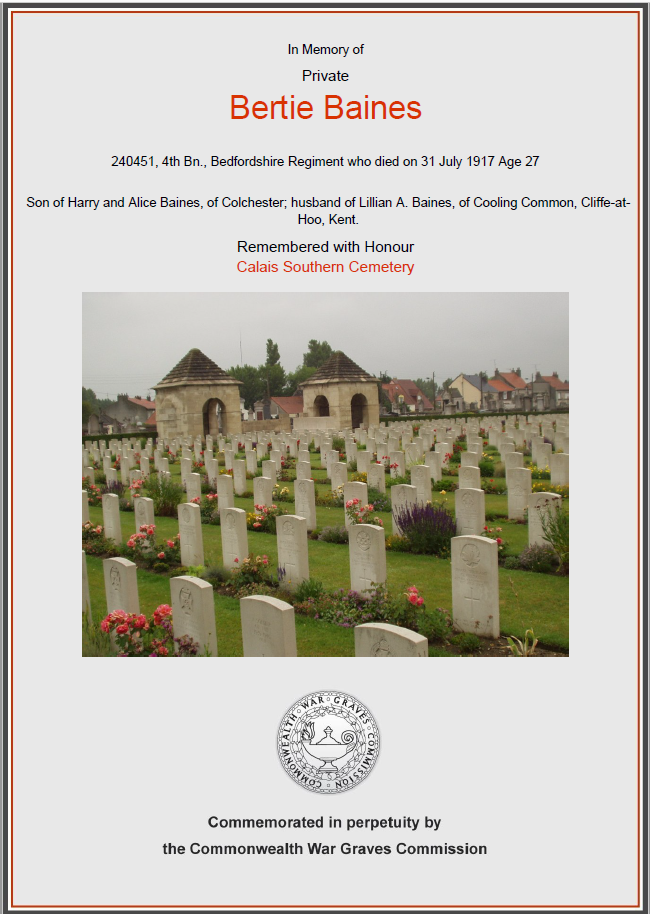