Alfred & Jack Whibley
Alfred and Jack were born in 1891 and 1894 respectively to the President of the Co-Operative Society whose Store in the village is pictured below from the parish archives. 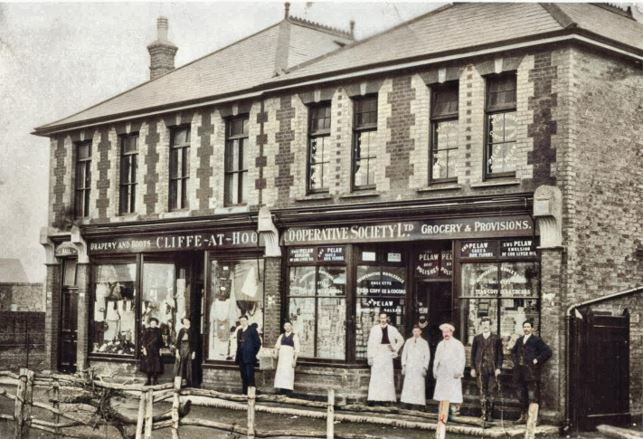 Cliffe-at-Hoo Co-Operative Society
As two of four boys they lived at Homeside in Symonds Road, Cliffe. In 1911 Jack became an apprentice carpenter until war broke out. Jack, like many other young men, answered the call to arms being the first recruit to join ‘Kitchener’s Army’ from Cliffe. His elder brother Alfred, then a house painter, soon was to join him. 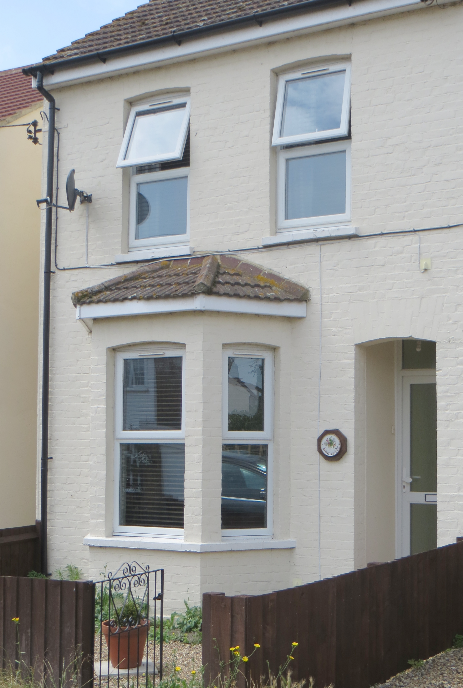 'Homeside', Symonds Road
When the First World War began in August 1914, many thought it would be a short war.
Britain's Secretary for War, Field Marshall Lord Kitchener of Khartoum disagreed. He believed that it would last at least three years and would involve large armies fighting on the continent of mainland Europe. He felt that Britain's professional Regular Army was too small and could not sustain a long war. Neither did he have much faith in the Territorial Force, part-time soldiers that he considered, wrongly as it turned out, as untrained amateurs.
Kitchener's original idea was to raise 500,000 men and within days of the beginning of the war his face appeared on what was to become an iconic recruiting poster. The posters were everywhere; no one could escape the Field Marshall’s steely-eyed glare. He wanted them and, such was his prestige, men answered the call in droves within days – nearly 300,000 men in August alone.
Jack enlisted into the Royal Engineers, 61st Field Company and served as a 2nd Corporal.
Jack landed in France around May 1915 and lost his life probably at Ypres. This area of Ypres was one of utter carnage the advantage to each side being lost or gained with horrendous loss of Life. But British troops were to remain in possession of the town for the duration of the war; in the process Ypres itself took on a powerful symbolic importance, embodying in its tragic destruction, the virtues of gallantry, endurance and individual sacrifice.
Jack was killed in action on 9th August 1915 and is remembered with honour at the Brandhoek Military Cemetery.
In the Chatham Rochester and Gillingham News his sacrifice was praised whilst the greatest sympathy is extended to his father who had just suffered the bereavement of his wife. At Jack’s memorial service his father, other brothers, relatives and friends joined with other soldiers to mourn his passing. The Reverend A T Wallis took the service and Mr. James Anderson played the organ to great effect.
Alfred was to join the Royal Fusiliers, 22nd Battalion. Alfred was killed in action on 17th February 1917 during the German retreat to the Hindenburg Line and is remembered with honour at the Serre Road Cemetery.
Their younger, Leo, who was 14 at the break of war, fell during WWII. 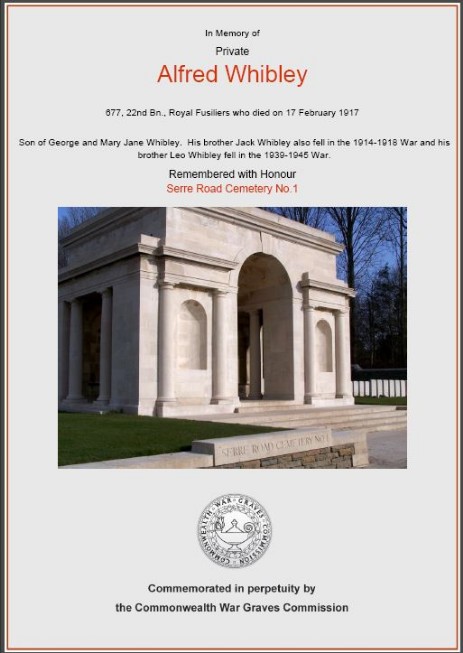 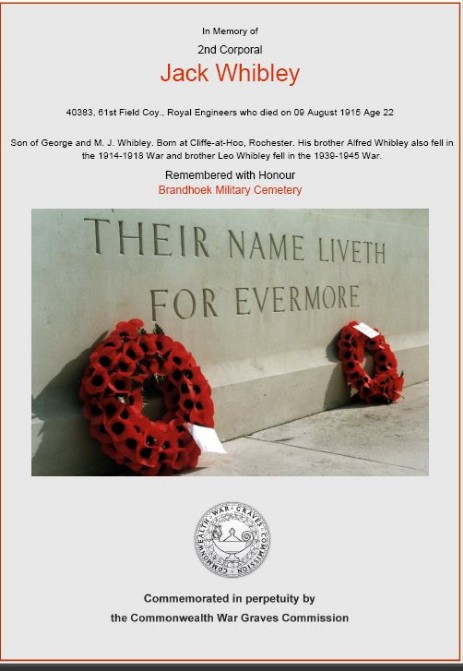