×
Go to content
William John Thorndike (1863 - 1912)
On the 3rd of September, 1863 a boy was born to a young   couple, William & Emma Thorndike, at Johnsons Whiting Works   cottages which were in later years known as Flint Cottages   or Granny Callars and which laid to the northern end of   Cliffe Canal alongside the Canal Tavern, which under the   stewardship of one Isaac Thompson was known locally as ‘The   Shant’. The young boy was named William John Thorndike and   he was of course not to know that in later years he would   become landlord of that same public house whose smells and   banter surrounded his crib.
At the age of 17 he is working alongside his father   and his two brothers, Joseph and George, at the cement works   that surrounds his home.
In 1882 William decides to leave   home and childhood sweetheart, Priscilla Albon, and seek his   fortune in far-away lands. He boards the Steam Ship   ‘Liguria’ of the Orient Line and travels to Gibraltar, Port   Said, Suez, and Colombo before reaching his destination in   Australia.
Although it is not fully known what William did in   Australia it appears that he spent his time on the sheep   stations in and around Murray Downs & Swan Hill in Victoria.
William returns home to England in 1889 and soon   marries Clara Hammond at St. Nicholas’s Church in Strood and   the couple settle down in Upper Stoke where he takes up the   running of White Horse pub. It is there that their son,   William Hector is born and is baptised at St. Helen’s   Church.
When a vacancy for a landlord in Cliffe arises he   takes it and he returns to Cliffe once more and becomes the   licensed victualler of the Canal Tavern – a few yards from   the cottage where he was born. It is here that the couple   have their daughters, Winifred May, Gladys Marion and   Dorothy: sadly Gladys Marion succumbs to meningitis just   before her second birthday. 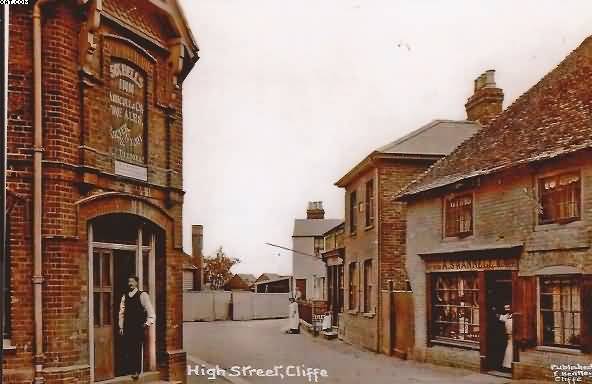 John standing outside the Six Bells
By 1901 William John becomes the landlord of the Six Bells with his cousins, running the establishment The Victoria Inn, across the road.
It is about this time that a tragic fire took place with a 100 yards of the Six Bells when Two cottages that lay opposite the chapel [which was later the Temperance Club] and  adjoined the forge were destroyed by fire.
The Topley family appear to have escaped before their home collapsed but tragically the Kenknight family, who lived next door, were trapped by the flames. Ellen Elizabeth, aged 7, Lilian May, 4, and their father Richard Henry Kenknight were found in each other’s arms burnt to  death. Their mother Elizabeth Jane died two days later in  hospital.
Their burial takes place on the 15th of that month at  St Helen’s Church, Cliffe. It is believed that William John Thorndike was among the rescuers and sustained a head injury   when the upper floor collapsed upon him.
William’s life is soon turned upside down with the sudden death of Clara, his wife in 1907 and the following year his son, William Hector dies of TB.
Whether William John has a longing for a return to his Australian life of   adventure it is not known but what is known however that he  has four houses built on Buttway Lane with a view over the Thames and names them Murray Downs, Swan Hill, Victoria and Australia Which replicated his place of settlement in that   land.
On the 16th May, 1912 William secretly marries his  childhood sweetheart, Priscilla Albon at Chatham Registry   Office and the details of their marriage was withheld from his friends and with the known exception of Thomas his  cousin who was landlord of the Victoria Inn, his family  also.
On 22nd of May, 1912 Priscilla enters the   downstairs room to find her new husband laying upon the   floor with his throat cut. Dr Rogers is sent for and, when   they turn William over, they discover multiple   self-inflicted stab wounds to his chest. William leaves a note behind explaining his actions.
William John   Thorndike is buried on the 28th of May at St Helen’s Church  Cliffe where his headstone still stands.
It should be noted also that, athough he committed suicide, Wlliam John Thorndike was allowed a burial within the church grounds which was not always the case.
This perhaps conveys as much as any epitaph can, the  stature of the man and reflects perhaps upon the fact that  the scars that he carried both physically and mentally after  the tragic fire, that took the Kenknight family in 1901,  were considered when the decision to allow the burial was   made.
Back to content